The crypto market performed well over the last week, but two key data points hint at a brief cooling off period.

The total crypto market capitalization reached its highest close in three months on April 3 at $2.23 trillion, but the performance between March 28 and April 4 was a mere 1.9% gain. During this time, Bitcoin (BTC) presented a 2.6% negative performance, although that was more than offset by the gains from altcoins.

While Ether (ETH) and Binance Coin (BNB) gained less than 3% over the past seven days, a handful of mid-capitalization altcoins managed to rally 20% or higher.

On April 1, the Bitcoin network difficulty reached an all-time high at 28.587 trillion. The indicator correlates to the computational power required to mine BTC blocks, currently at an estimated hash rate of 201.8 exahash per second (EH/s).

However, on the same day, the United States Securities and Exchange Commission officially disapproved the application for the ARK 21Shares Bitcoin exchange-traded fund (ETF). The regulator argued that the Cboe BZX Exchange had not met the requirements of listing a financial product under its rules of practice as well as those of the Exchange Act.

Comparing the winners and losers provides skewed results because the top-3 coins had a slightly negative impact. 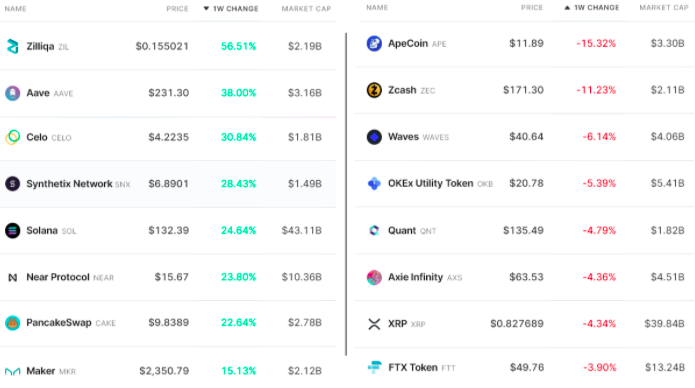 Zilliqa (ZIL) rallied 56% after reports that it will launch a metaverse-as-a-service platform in April. According to a press release, Zilliqa’s Metapolis is being built using the 3D real-time Nvidia Omniverse. Nvidia is a $684 billion Nasdaq-listed graphic processing (GPU) producer.

Aave (AAVE) gained 38% after the release of Aave v3, announced on March 16. The new features aimed to provide greater capital efficiency, increased security and cross-chain functionality. The non-custodial liquidity protocol allows users to lend, borrow or stake their assets to earn yield from their holdings.

Synthetix (SNX) rallied 28% after its Debt Pool Synthesis deployment was scheduled for April 7. Currently, the decentralized finance protocol operates debt pools across two Ethereum chains: the mainnet and layer-2 scaling solution Optimism. By transitioning into an “Optimism-native protocol,” the application will merge its pools to maximize liquidity.

Apecoin (APE) faced a natural correction after a 60% gain between March 21 and March 28, as the firm behind it raised $450 million in a funding round led by Andreessen Horowitz. Yuga Labs, the creator of the Bored Ape Yacht Club (BAYC), launched APE as a governance and utility token that allows its holders to oversee and manage the so-called ApeCoin DAO.

The OKX Tether (USDT) premium is a good gauge of China-based retail trader crypto demand. It measures the difference between China-based peer-to-peer trades and the United States dollar.

Excessive buying demand tends to pressure the indicator above fair value at 100%, and during bearish markets, Tether’s market offer is flooded and causes a 4% or higher discount.

The Tether reached 99.2% on April 2, its lowest level since January 26. While this is far away from retail panic selling, the indicator showed a modest deterioration over the past week.

The lack of retail demand is not especially concerning even as the total cryptocurrency market capitalization surpassed $2 trillion and the indicator is down 19% since Dec. 2021.

Perpetual contracts are currently reflecting mixed sentiment. As shown below, the accumulated seven-day funding rate is slightly positive for Bitcoin, Ether, Solana and XRP. This data indicates higher demand from longs (buyers), but it is far from excessive. For example, Solana’s positive 0.20% weekly rate equals 0.8% per month, which should not be a concern for most futures traders. 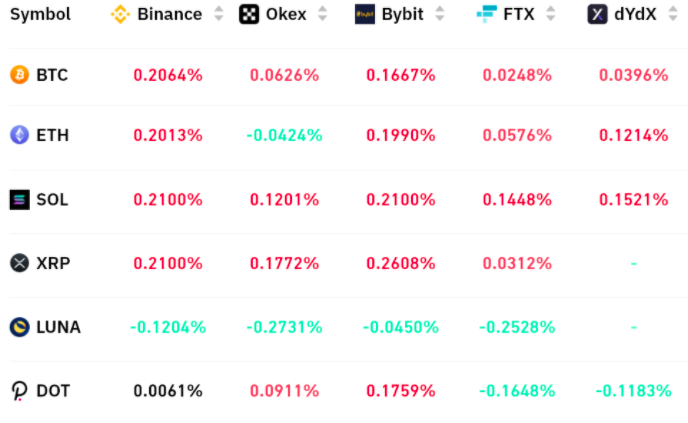 On the other hand, Terra (LUNA) showed slightly more demand from shorts (sellers) and the absence of Tether demand in Asia signals a lack of confidence from traders.

The total market capitalization rallied 26% in three weeks, from $1.67 trillion to $2.1 trillion on April 4. Yet, derivatives indicators show no sign of improvement, so there’s a lack of trust from investors. Until the sentiment improves, the odds of a negative price correction remains high.