The $50,000 resistance level seems to be the line in the sand that separates certainty from doubt that Bitcoin has cast off the four-year cycle trend according to Santiment.

Some analysts believe the four-year market cycle is changing and that the halving schedule may no longer determine cyclical conditions as Bitcoin closes in on the mid point between halvings.

The halving is when the amount of Bitcoin (BTC) rewards issued per new block mined is reduced by half. The next halving will happen around May 5, 2024, andl reduce block rewards to 3.125 BTC.

According to author @Alerzio on the Santiment blog on April 4, “the important resistance on the way is $50K.” The blog stated that breaking this level by or around the next mid-halving on April 11 would cast off many doubts as to the possibility that the traditional market cycle has been broken.

“If the price (stabilizes) above this level, then we can give more credit to the thesis that says: ‘this cycle is different than the others.’”

Bitcoin has gone through four halvings so far, all of which have seen a similar series of three events over the course of four years as described by Santiment. A divergence from that cycle appears to have begun:

“In my opinion history won’t happen exactly in the same way that happened before.”

Santiment demonstrated that traditionally after each halving, a bull market took hold where price began to increase along with network activity, followed by a dramatic climax in price leading to an all-time high (ATH). This pattern took place from the most recent May 2020 halving to the November 2021 ATH. 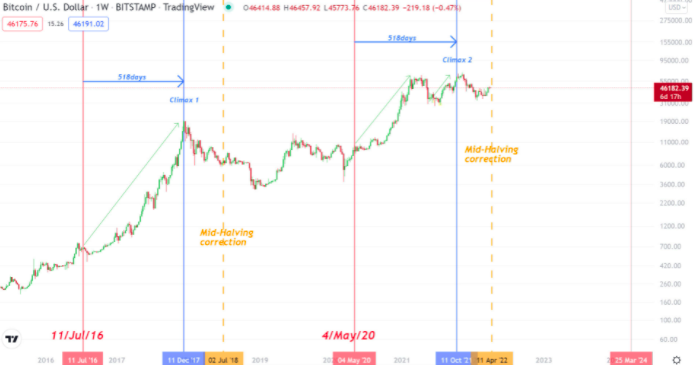 Onchain Bitcoin analyst Willy Woo has made a related observation. On Mar. 20 he tweeted a follow up to his October 2021 analysis in which he said that while previous market cycles were predictable, we may now have “No more 4 year cycles.”

We’re likely seeing the first signs of “The Last Cycle” thesis playing out. 3 relatively short bull and bear markets have transpired since the 2019 bottom already.

He also noted the shorter bear and bull markets that have taken place since 2019 without a climactic blow-off-top.

Woo believes the new unpredictable cycle will be dominated by a complex interplay between supply and demand, which may already be playing out according to Santiment’s findings that network activity is up at a much higher rate than the last mid-halving in 2018. Higher network activity suggests higher demand. Founder of Bitcoin data provider Look Into Bitcoin, Philip Swift, believes that not only has the four-year cycle been broken, but it has “been gone for a while.” In a Mar. 20 tweet in reply to Woo, he said that we have “one more cycle before $BTC moves out of it into a new growth phase…”