Traders say the threat of a lengthy bear market is heightened after BTC price drops to $39,200.

The cryptocurrency market took a turn for the worse on April 11 after concerns related to rising inflation, the prospect of several more interest rates by the U.S. Federal Reserve and fear of a global food shortage led to widespread weakness across global financial markets.

Data from TradingView shows that bears broke through the bulls’ defensive line at $42,000 in the early trading hours on Monday to drop Bitcoin (BTC) to a daily low of $39,200 and several analysts project even lower prices in the short-term.

Here’s a look at what analysts are saying about Monday’s move lower and whether or not traders should expect more downside over the coming days.

The dip below $40,000 was foreshadowed by market analyst Michaël van de Poppe, who posted the following chart on Sunday highlighting the strong move in Bitcoin, but he also warned that “it’s the weekend and we still need to crack this resistance zone.”

After Monday’s pullback, van de Poppe posted a follow-up tweet addressing the rejection at $43,000 and offering insight into what level to keep an eye on as the next support. According to the trader, “the green zone” in the $43,000 to $44,000 range would need to become support to preserve any blossoming bullish momentum.

This bear market is “different” 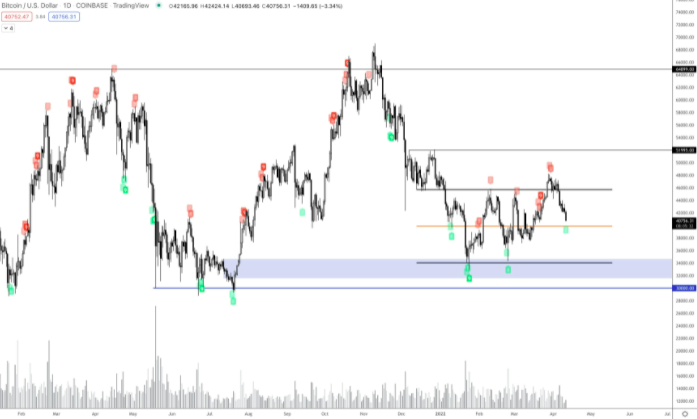 Insight into the confusion that many crypto traders have been experiencing over the past year was provided by decentralized finance advisor and pseudonymous Twitter trader ‘McKenna’, who posted the following chart looking at the Bitcoin price action since April 2021. McKenna said that “this has been the weirdest bear market I’ve seen.”

“I don’t even think we see sub $30,000, I’m more in favor of just choppy price action in this range which is also hell. Just need corn to chill and let my altcoins run.”

A similar sentiment was expressed by crypto analyst and pseudonymous Twitter user ‘360Trader’, who posted the following chart highlighting the consolidation range Bitcoin has been trading in since last November.

Where does Bitcoin go from here?

A final bit of insight on the future of BTC price was provided by Philip Swift, markets analyst and founder of LookintoBitcoin, who posted the following chart showing the recent price rejection off the 1-year moving average (MA).

According to Swift, the 1-year MA “has acted as a pivot point for bull v. bear markets throughout Bitcoin’s history.”

“Can’t really call it a bull market until we are convincingly back over the 1yr MA.”