While men wanted, women did: Empowering female creators with NFTs and crypto

Female artists and creators are implementing various forms of activism and social value into NFT collections, using them to combat gender inequality.

With the blockchain industry growing at lightspeed, businesses are actively and, even desperately, seeking out talent; and there just doesn’t seem to be enough manpower out there. Enter women — literally around 50% of the global population that has, so far, been heavily underrepresented in crypto. With most developers being men, it’s understandable this still dev-led space noticeably lacks female contributors, but as the industry surges, womanpower is needed. 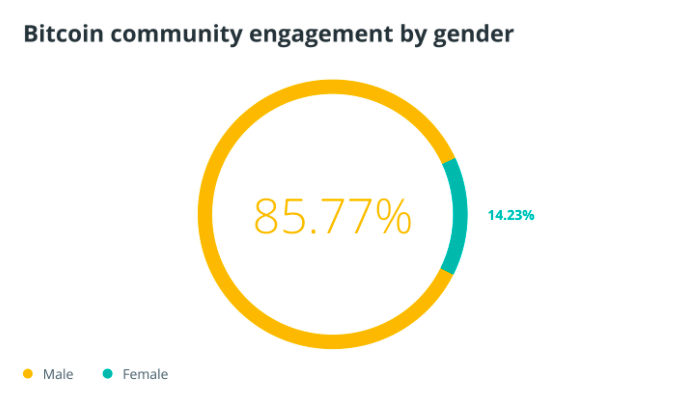 And, so, women have begun slowly and steadily entering the crypto space and the world of nonfungible tokens (NFTs). While only an estimated 5% of women own NFTs, and 5-15% are creators or founders of collections, the impact of female-led NFT projects is profound. Unlike the mass of solely artistic projects, these female-led NFTs show a preoccupation with social activism and empowerment of women across the globe — a trend charged with the potential to create a new paradigm for more socially-beneficial use cases and models for the asset class.

Related: If the glass slipper doesn’t fit, smash it: Unraveling the myth of gender equality in crypto

Down with the barriers: Time, money, location and class

Initial funding is a huge setback for many women who are typically weighed down by barriers like the gender pay gap. Women have less leeway in their pay, hence fewer funds to spare — a slippery slope to creating a male-driven market. They are also thought to be apprehensive about investing in their own entrepreneurial ideas. However, this risk-averse behavior is not so much a gender-specific trait, as it is a byproduct of the gender pay gap and the fact that women have larger responsibilities in the household. A recent survey indicates that following the post-COVID “Great Resignation,” women are finding it harder to return to work, with childcare and home responsibilities bearing down as the chief reason. Today, with women struggling to return to work and getting paid less overall, it’s natural that they may be less likely than men to find the time and money to invest in their own startups.

NFTs bring art and other on-chain-compatible business ideas to the digital space, creating a low-cost solution for startups and letting more women get in the game. The decentralized and digital nature of blockchain also solves the crucial time/space inequality women are often subject to when other duties keep them away from the workplace more than their male counterparts. 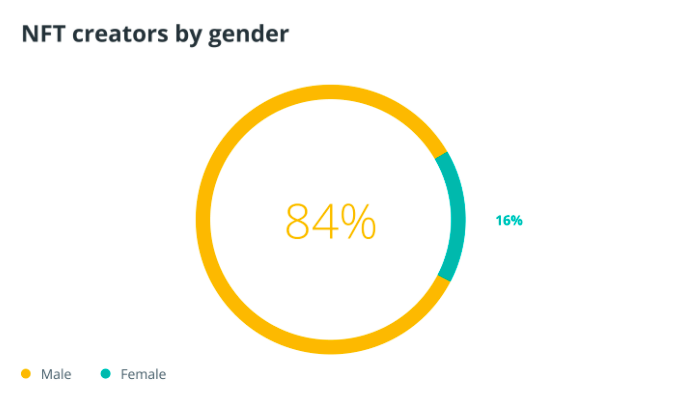 By operating beyond physical spaces, NFT startups also break through class: Imagine a painter from a small town able to sell her work in the same space — for example on Open Sea — as “pedigree artists” born and raised among big names in New York or London galleries. In all, the emerging digital marketplaces have immense potential to tear down entry barriers and really level the playing field for all underrepresented groups, in other words, for all humans.

Similar to how NFTs business bypasses class and space, it can also completely circumvent the need to present your gender thanks to the anonymous nature of blockchain technology. Traditionally, art created by women sells for around 50% less than that of male artists.

Since NFT creators are in no way required to reveal their identities or genders, women may work in a sphere unchained from the usual prejudices, stigmas, pay gaps and further obstacles that people in traditional industries, unfortunately, still face. People are more than their gender and NFTs give us a chance to separate from it or associate ourselves with it per our own volition — a privilege women have not enjoyed very often in the past.

While the technology behind NFTs can itself present women with better economic opportunity, even discussing the feats of NFT projects is redundant unless we begin with how we can make the space actually accessible to women. For that, we must lay a foundation from the ground up beginning with basics like ensuring women and girls are in safe, healthy and free circumstances no matter where they live, all while having access to both basic and technical education to join the decentralized finance (DeFi) industry should they decide. In this sense, projects like World of Women, which supports causes like She’s the First and Too Young to Wed, Boss Beauties “providing mentorship programs and scholarships to young women and students around the world” and Girlies donating part of its revenue to the Malala Fund sponsor the right kind of activism that would empower girls to be able to engage the power of nonfungible tokens and blockchain.

Women-led NFT collections are among the first to focus on social change rather than just economic value or token utility. Perhaps, this indicates primarily that women’s historical context and current societal circumstances are not what they should be and, secondly, that this experience is also pushing them to innovate, adding social value to cutting-edge technology. How’s that for girl power?

We even incorporated mental health initiatives

Web3 has the potential to create a 3D internet experience, one in which we are immersed and act through an avatar in a meta-space rather than through a browser and web pages. Alpha Girls Club has created a token tied to a safe space for women with an overall mental health initiative behind the entire NFT collection. This might prove a powerful and useful resource as we develop the paradigm for a new type of internet, especially in a male-dominated NFT industry in which there are still recent reports of harassment of female Bored Ape Yacht Club members or projects that objectify females avatars like the highly sexualized Solana Sluts series. 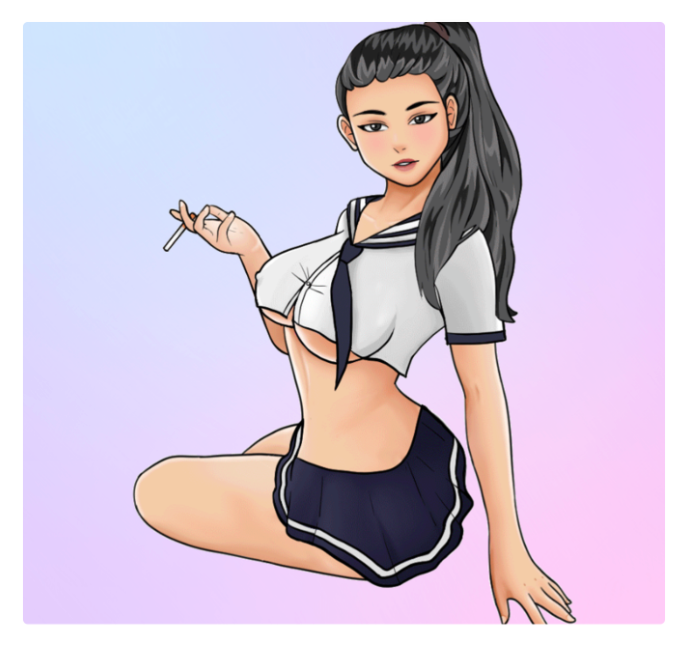 Female-led NFT collections also often present a drive toward diversity and representation. All the collections mentioned above, along with others like The Flower Girls, Women and Weapons and many more, are all algorithmically-generated images that show a myriad of skin tones, styles ranging from feminine to more androgynous and cultural elements, to name a few. This indicates that perhaps, finally, in the permissionless blockchain space, women will be able to actively shape the narrative of what it is to look and, more importantly, be a woman in modern society. This touch on diversity in women’s NFT projects is unsurprising, as the female narrative has historically seen extensive intersectionality with racial equality and LGBTQ+ movements.

Thank you, next: Algorithmically-generated collections

That said, while empowering female representation through art is greatly served by algorithmically generated collections as an easy means of mixing all sorts of traits to female images, they can also be a little reductive in that they only generate the classic approximately 10 thousand algorithm-generated NFTs. Not a problem per se, but NFTs can do so much more to empower women and society at large. You don’t need an algorithm or a collection; you just need something to tokenize and sell on open auction spaces. And, even if algorithms are still involved, there are already technologies capable of offering much more complex algorithms that go beyond simply mixing various trait combinations — it’d be intriguing to see how female creators could apply this and move past randomized images of women.

All this notwithstanding, it’s easy to be put down in a still early-days industry where we’re still trading pixelized and/or algorithmically generated JPEGs. This is when it’s important to look ahead to how the majority of these and future NFT projects will expand their reach by — hopefully — creating upgradable NFTs, developing their relations to the physical world and growing into full-on metaverse utility tokens.

We need to talk about the men in the picture

Fair warning: This next part is a bit of a downer, but it must be addressed. here are truly many NFT collections with female founders on OpenSea: World of Women, Women and Weapons, Women Rise, Rebel Society, Girlies, The Flower Girls — the list goes on. The amount is actually surprising in the best way, given that women are offered corporate-level positions more rarely than men. 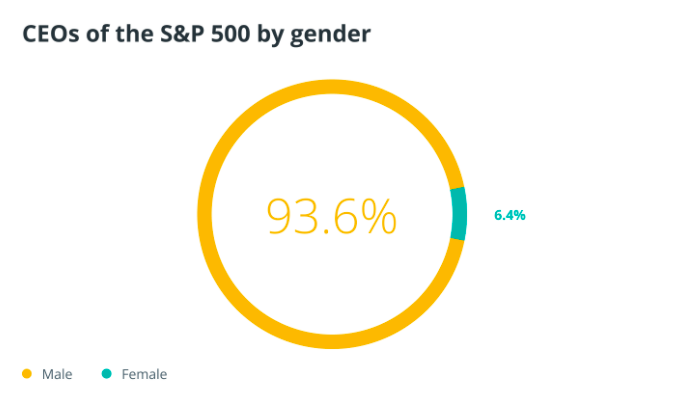 But, there is one rather disturbing trend in the majority of these collections: While the main founders and artists were women, there was often a male co-founder — most often providing the technical mastery for minting the NFTs. In most cases, these were husbands and, in one case, even a father. Now, don’t get me wrong, I truly commend these husbands, fathers and friends for supporting and empowering the women around them so they can succeed. Such “HeForShe” teamwork is precisely what is needed to slowly create the absent but desperately needed equal opportunity in all spheres. There is nothing wrong with this on an individual level, but on a macro level, the pattern implies women lack something to be self-sufficient in their NFT endeavors.

It’s a bleak prospect to witness how behind every successful woman in the NFT space is a man who provided a “technical boost.” It is entirely likely that women lack critical exposure to blockchain technology and coding specialties which are typically more popular among men. Still, that’s pretty grim for a demographic that makes up about half the world’s population. In this sense, we need to look into getting more women into the tech sector to create a sustainable and inclusive NFT ecosystem that women can utilize without needing additional support.

A part of this solution could be to expose women to more examples of ladies working successfully in tech and NFTs, in particular. And, this is already happening: Vellum LA partnered with Artsy to present a Artists Who Code exhibition which features NFT art by female and non-binary artists, thus popularizing female and non-binary role models in the space. Another important initiative to follow up on this exposure is to focus on the recruitment of women and other underrepresented groups in the NFT and tech industry, something most female-led collections like, for example, CryptoChicks have openly stated doing in their hiring philosophy.

Undeniably women’s history and modern context have clearly pushed us towards implementing various forms of activism and social value into our NFT collections. Women are currently a group of creators shifting the NFT paradigm from idle art to a social tool. And, the great thing about NFTs is that for once, the technology itself is helping us thrive through its options for anonymity, decentralization and permissionless nature.

However, we must still be mindful. In today’s environment, NFTs, the Metaverse and even the internet are inaccessible to women not living in developed countries, many of which face life-threatening adversity on a daily basis. In this sense, we must prioritize projects geared toward providing girls and women with basic needs and freedoms and then shift focus to education and role models in tech. Only after these basics have been secured can we truly realize women’s potential in the industry. Fortunately, we’re seeing activism grow in parallel with all sorts of other NFT applications. It is precisely this ecosystem of different female-led NFTs that can work well together to create a brighter future for women in the world.