It could still go either way for Bitcoin price action, but one analyst believes Bitcoin is already coming out on top versus equities.

Bitcoin (BTC) may continue its “bear market,” one trader says amid hope that a U.S. dollar reversal could soon improve BTC price action.

In his latest YouTube update on May 2, Michaël van de Poppe argued that USD’s current surge would not last long.

Bitcoin is still under pressure as stocks and crypto alike face the reality of a major policy flip from the U.S. Federal Reserve.

Due to be announced this week, the Fed is tipped to end the “free money” era since the March 2020 COVID crash once and for all — and risk assets should be first to suffer.

The COVID crash saw the previous peak in the U.S. dollar index (DXY), which then declined as Bitcoin led crypto markets to new highs.

That inverse correlation since turned around once more, and now, with DXY at twenty-year highs, crypto is on the receiving end of pain.

Van de Poppe notes, however, that compared to previous DXY bull runs, Bitcoin has lost considerably less in USD terms. 2014, for example, saw BTC/USD shed over 80%, while the drawdown from its all-time highs in November 2022 has so far only totaled a maximum of 55%. 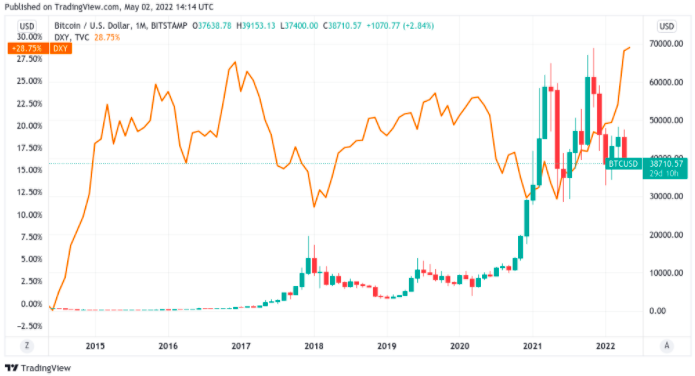 “Right now, we’re seeing this implied strength, and I think that the dollar is getting into a period where we’re getting done of that move,” he commented, adding that a reversal was “close.”

Nonetheless, Van de Poppe said, the “Bitcoin bear market might continue,” and if so, targets for the downside now extend beyond $30,000 to $25,000.

Speaking to Wall of All Streets Podcast host Scott Melker on May 2, Mike McGlone, chief commodities strategist at Bloomberg Intelligence, said that a reset of crypto and traditional markets alike was “already happening.”

“This is an ebbing tide of massive speculative excesses in all markets; cryptos were just a great leading indicator and now we’re taking the tide out and it’s a question of how far,” he explained.

“This week, the Fed’s going to raise 50 basis points for the first time in years; I could go back and check but I haven’t seen that in a long time.”

As before, McGlone nonetheless predicted that Bitcoin would ultimately benefit from the upcoming upheaval.

“I think that’s going to be part of the trigger that’s going to flush out the rest of the excesses in the market, most notably equities, and then Bitcoin will come out ahead — and it’s already happening,” he added. 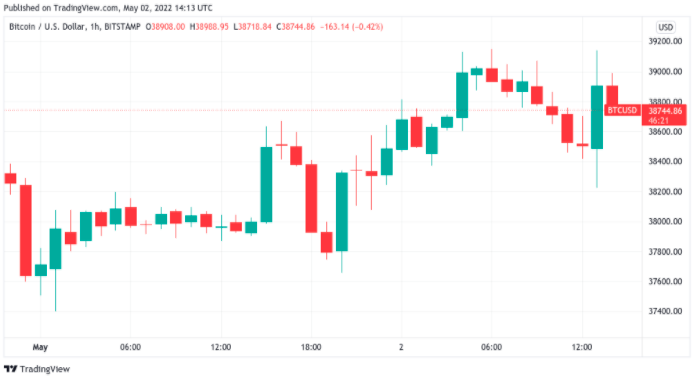 BTC/USD traded at $38,900 at the time of writing, according to data from TradingView.