Strong euro and overbought readings could pressure the dollar further, showing signs of topping out — Bitcoin at risk of falling.

The United States dollar index (DXY) retreated broadly from its prevailing bull run in the past two weeks, dropping by up to 3.20% after hitting its two-decade high of 105.

To recap, the greenback’s weight against the basket of top foreign currencies grew by around 14.3% in a year, primarily as markets looked for safe havens against the fears of a hawkish Federal Reserve and, more recently, the military conflict between Ukraine and Russia.

Cash balances among the global fund managers grew 6.1% on average since 9/11, a recent survey of 288 asset allocators by Bank of America showed. The report also noted that 66% of asset managers believe global profits will weaken in 2022, prompting them to hold “overweight” cash positions.

“The market has hoarded a huge amount of dollars in recent months,” George Saravelos, strategist at Deutsche Bank, told the Financial Times, adding that it is “leading to a very substantial dollar overvaluation.”

Thus, the U.S. dollar’s latest retreat may have been an interim correction to neutralize its “overbought” conditions, as the greenback’s weekly relative strength index (RSI) readings also suggested, shown in the chart below.

From a further technical perspective, the DXY could decline further toward a rising trendline that, as support, has been capping its downside moves since January 2021, as shown below.

If more selloffs occur, the index is likely to pull back from its current resistance range, with the next downside target at the 0.786 Fib line near 100.

The DXY also pulled back earlier this week as Christine Lagarde, president of the European Central Bank (ECB), set a new and more hawkish policy on May 23.

As a result, rates in the eurozone would shoot back to zero, the prospect of which has made the euro stronger against the U.S. dollar.

But, even with the ongoing Ukraine-Russia crisis and its access to energy thrown into haywire, the eurozone’s confidence in business growth remains strong, the recent IFO survey shows. That would mean more upside boost for the euro, which could pressure the dollar lower. 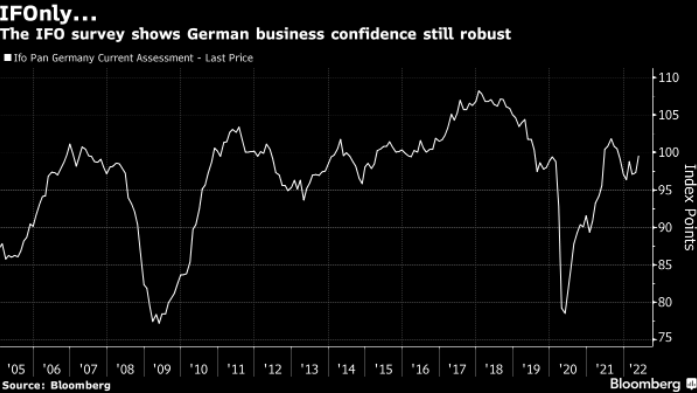 “It’s still too soon to say with any confidence that the dollar is now into a weakening trend,” said John Authers, senior editor at Bloomberg Opinion, adding:

“But its decline is another indication that the ‘stagflation and ever-higher rates’ narrative is being rethought.”

A weaker DXY merely represents its declining weight against foreign currencies. But, a deeper look into the dollar shows weakening purchasing power in a high inflation environment. The consumer price index (CPI) was above 8% as of this April 2022.

As a result, the U.S. dollar, albeit stronger than it was a year ago, has not been able to send emerging market currencies into a tailspin, thus breaking off their widely-watched negative correlation.

Notably, returns on the currencies of developing nations such as the Brazilian real and Chilean peso have been higher than the dollar since January 2022. 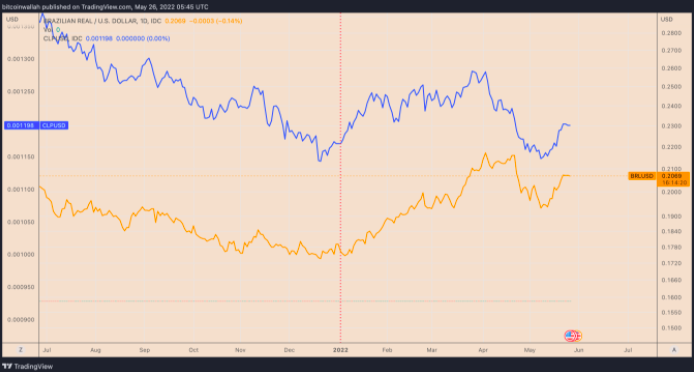 Emerging market (EM) currencies tend to underperform when the dollar rises, mainly because investors look at the greenback as their ultimate haven in times of global market uncertainty. But, with commodity prices rising due to the Ukraine-Russia crisis, investors are rethinking their strategy.

Excerpts from his statement to the Wall Street Journal states:

“Emerging-market central banks are forced to tighten policy to keep pace with the Fed. It’s either that, or capital controls are imposed.”

The ongoing power play between the dollar and the EM currencies has left Bitcoin (BTC) without consideration. Its value has dropped by over 50% since November 2021 and remains heavily with risk-on assets.

However, Bitcoin’s long-standing negative correlation with the DXY has flipped to positive this week. This suggests that a further decline in the dollar markets might not necessarily trigger a BTC price recovery in the near term.

Calls for a $20,000 macro bottom and even much lower are growing louder as Bitcoin struggles to rise back above the $30,000 mark.