Bitcoin’s move to $32.4K was a fakeout — Here’s the price level most BTC traders are waiting for

Some traders lost hope this week after BTC price rejected at $32,400, but many say this level is where they will become buyers.

The end of the first week in June brought more pain to global financial markets as the tech-heavy Nasdaq composite closed the day on June 3 down 2.3%, while the S&P 500 shed 1.4% of its value.

The cryptocurrency market hasn’t faired any better and data from TradingView shows that an early morning attempt to push Bitcoin (BTC) above $30,000 was hit with a wave of selling that dropped it to a daily low of $29,286.

Here’s a look at what several market analysts are saying about the outlook for BTC as it remains pinned inside a narrow trading range.

Price is stuck in the lower range

Bitcoins’ slide back into its current range was “expected,” according to crypto trader and pseudonymous Twitter user Altcoin Sherpa, who posted the following chart highlighting the price pullback into the middle of its recent trading range.

“A bit lower is likely a better place to long but this entire area is choppy and not very clear to me for levels. Would rather wait for 28.4k first. #Bitcoin”

Fellow trader and pseudonymous Twitter user ShardiB2 likewise lamented the price pullback into the trading range, noting that “Elon, Dimon, Goldman, etc., saying [the] economy is going to be shit for a while is going to weigh on markets.”

Further insight into what levels to keep an eye on for a good entry was offered by EmperorBTC, who posted the following chart highlighting the “previous range high acting as the resistance.”

“Looks like the run to [$]32K was only a deviation. Was not expecting the previous range high to act as such strong a resistance. Expecting support at PoC [point of control] now and will Spots there.”

Bulls will win in the long-run

An estimate on how long crypto traders can expect the current market struggle to persist was provided by Twitter user Crypto Rover, who posted the following chart outlining the formation of a bullish reversal pattern. 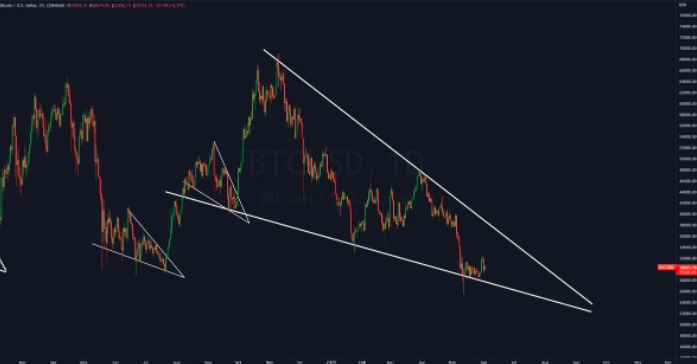 “It may still take another 3 months before #Bitcoin finally starts moving up at a significant pace. But one thing is sure, we are creating a typical bullish buyers reversal pattern. Time is on our side now.”