Although Bitcoin is struggling to form a bottom, altcoins are on a roll and the current price action could benefit UNI, XLM, THETA and HNT.

The United States equities markets witnessed a sharp comeback last week, led by the Nasdaq Composite which gained 7.5%. The S&P was up about 6.5% for the week while the Dow Jones Industrial Average managed a gain of 5.4%.

Continuing its tight correlation with the equities market, the crypto markets are also attempting a relief rally. Bitcoin (BTC) has seen a modest recovery but some altcoins have risen sharply in the past week. This suggests that investors are taking advantage of the sharp fall in the price to accumulate altcoins at lower levels. 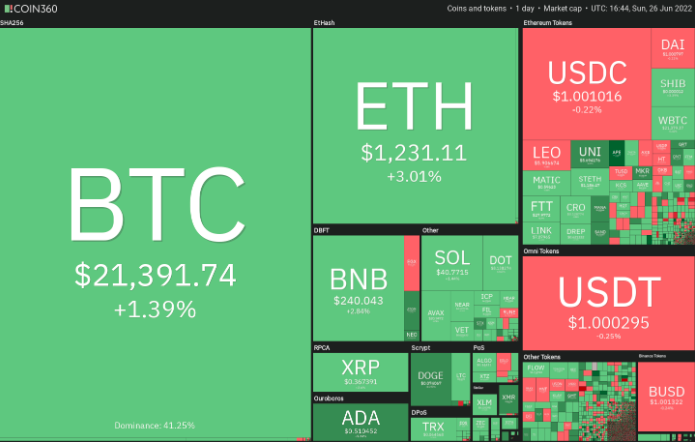 Smaller-sized investors have been using the decline in Bitcoin to build their position to at least one Bitcoin. Glassnode data shows that the number of Bitcoin wallet addresses having more than one Bitcoin rose by 873 between June 15 to June 25.

Could the recovery in Bitcoin and altcoins pick up momentum? Let’s study the charts of the top-5 cryptocurrencies that could charge higher in the short term.

Bitcoin’s relief rally is facing stiff resistance near $22,000 as seen from the long wick on the June 26 candlestick. This indicates that the bears are not willing to give up their advantage and are selling on rallies. 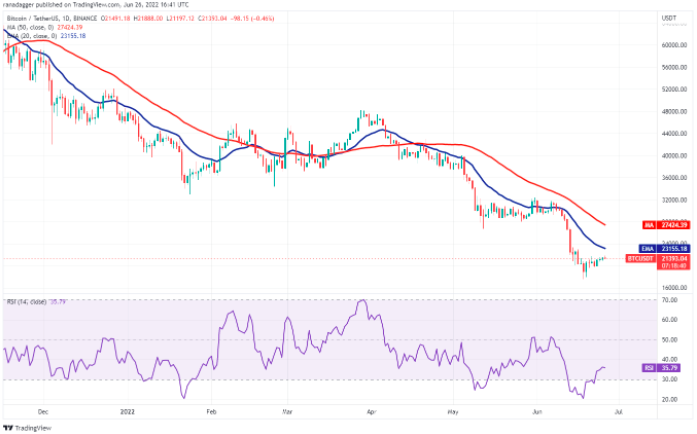 The sellers will try to pull the price toward the vital support of $20,000. This is an important level to watch out for because a bounce off it will suggest that bulls are attempting to form a higher low.

That could enhance the prospects of a break above the 20-day exponential moving average ($23,155). If that happens, the BTC/USDT pair could indicate a potential trend change. The bulls will then try to drive the price toward the 50-day simple moving average ($27,424).

On the contrary, if the price turns down and plummets below $20,000, it will suggest that bears remain in control. The sellers will then try to sink the BTC/USDT pair to the crucial level of $17,622. 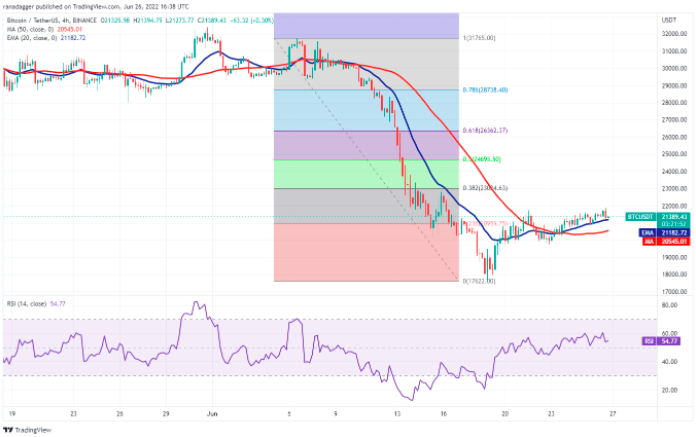 The failure of the bulls to push the price to the 38.2% Fibonacci retracement level of $23,024 suggests a lack of demand at higher levels. The moving averages have flattened out and the relative strength index (RSI) is just above the midpoint, suggesting a range-bound action in the near term.

If the price slips below the moving averages, the pair could drop to $20,000. A break below this support could signal weakness.

Alternatively, if the price rebounds off the moving averages, it will suggest that bulls are buying on dips. The bulls will then attempt to push the price toward $23,024. If this level is crossed, the next stop could be the 50% retracement level of $24,693.

Uniswap (UNI) rebounded sharply from $3.33 on June 18 and has reached the stiff overhead resistance at $6.08. The bears are defending the level aggressively but a minor positive is that the bulls have not given up much ground. 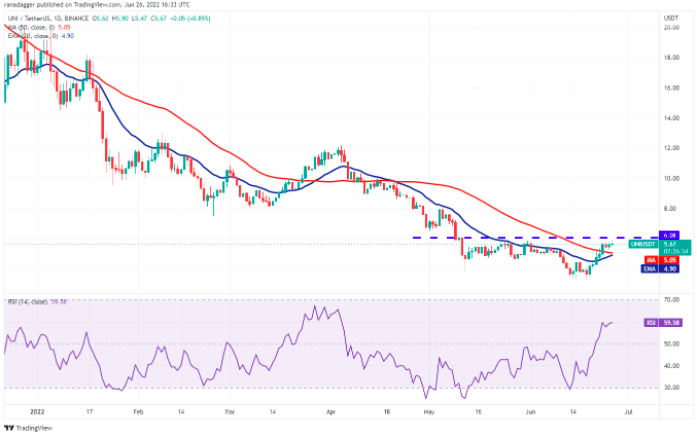 The moving averages are close to completing a bullish crossover and the RSI is in the positive zone, indicating that the path of least resistance is to the upside.

If buyers drive the price above $6.08, the bullish momentum could pick up and the UNI/USDT pair could rally to $8. This level could again act as a stiff hurdle but if bulls overcome it, the next stop could be $10.

On the contrary, if the price turns down from the current level and breaks below the 20-day EMA ($4.90), it will suggest that the trend remains negative and traders are selling near resistance levels. The pair could then decline toward $4. 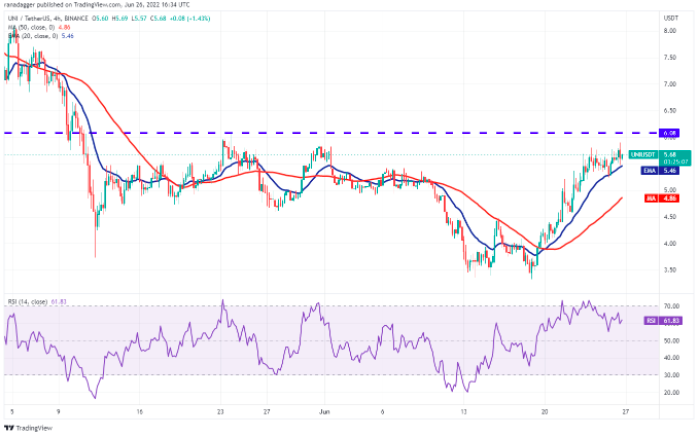 The bears are attempting to stall the recovery near the overhead resistance at $6.08 but the rising moving averages on the 4-hour chart suggest that bulls have the upper hand in the near term.

If the rebound off the 20-EMA sustains, it could increase the possibility of a break above $6.08. If that happens, the pair could pick up momentum and rally to $6.66 and then to $7.34.

Another possibility is that the pair turns down and breaks below the 20-EMA. In that case, the pair could slide to the 50-SMA. A break below this support could invalidate the bullish view. 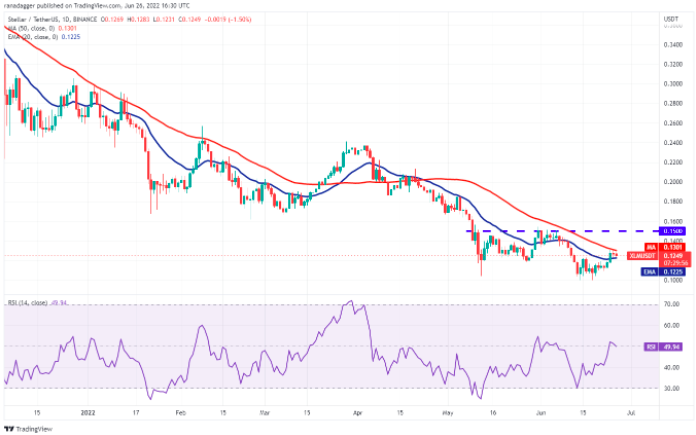 A minor positive is that bulls have not allowed the price to slip back below the 20-day EMA ($0.12). The flattening 20-day EMA and the RSI near the midpoint suggest that bulls are attempting a comeback.

If buyers drive the price above the 50-day SMA, the XLM/USDT pair could attempt a rally to the overhead resistance at $0.15. If this level is cleared, it may signal the start of a new uptrend.

This positive view could invalidate in the short term if the price continues lower and breaks below the 20-day EMA. The pair could then slip to $0.11. 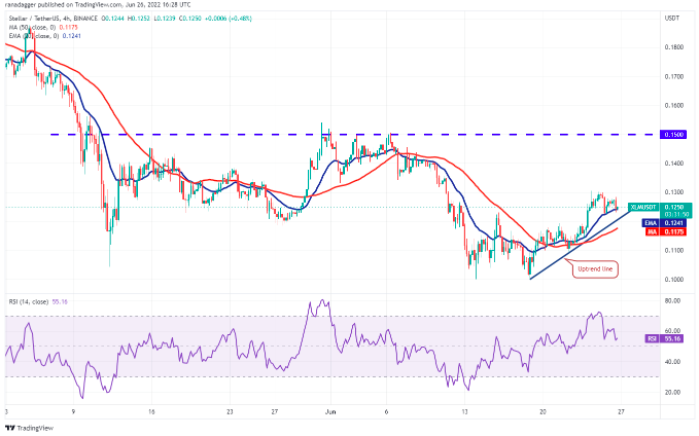 The moving averages on the 4-hour chart are sloping up and the RSI is in the positive territory, suggesting advantage to buyers. The buyers will have to propel the price above $0.13 to open the doors for a possible rally to $0.14 and then $0.15.

Contrary to this assumption, if the price slips below the 20-EMA, the pair could drop to the uptrend line. A break below this support could tilt the advantage back in favor of the bears. The pair could then slide to $0.11.

Theta Network (THETA) has been consolidating in a tight range between $1 and $1.55 for the past several days. The longer the time spent inside a range, the stronger will be the breakout from it. 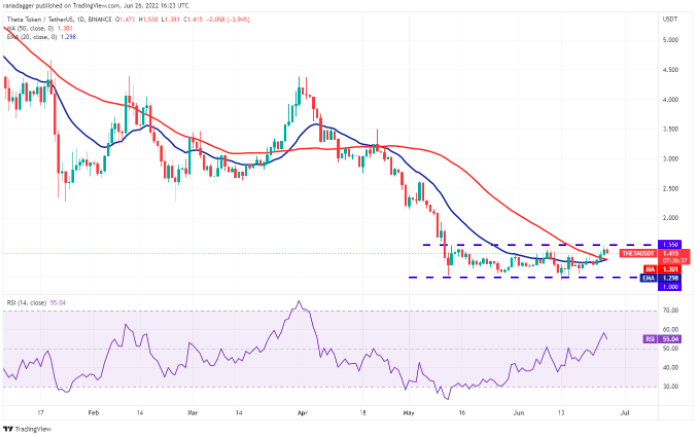 Both moving averages are on the verge of completing a bullish crossover and the RSI is in the positive territory. This suggests that bulls have a slight edge. If buyers push the price above $1.55, it will suggest the start of a new up-move. The THETA/USDT pair could then rise to the pattern target of $2.10.

Contrary to this assumption, if the price turns down from $1.55, it will suggest that bears continue to defend the resistance aggressively. That could keep the pair stuck inside the range for a few more days. 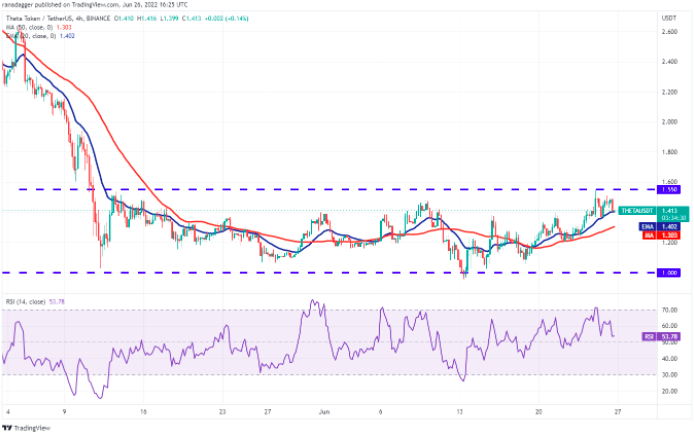 The 4-hour chart shows that the price turned down from the overhead resistance at $1.55 but a positive sign is that the bulls are attempting to defend the 20-EMA. This suggests that the sentiment is turning positive and traders are buying the dips.

If the price rebounds off the current level, the bulls will again try to clear the overhead hurdle at $1.55. If they can pull it off, it could suggest the start of a new uptrend. Conversely, if the price breaks below the 20-EMA, the pair could drop to the 50-SMA. 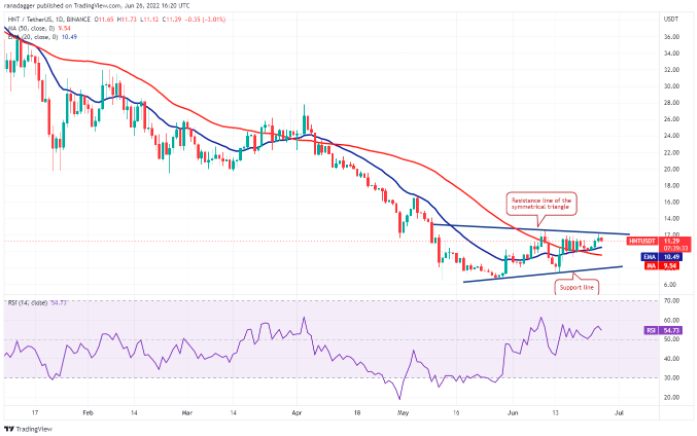 The moving averages have completed a bullish crossover and the RSI is in the positive territory, suggesting that bulls have a slight edge.

The price has been stuck between the resistance line of the triangle and the 20-day EMA ($10.50) for the past few days. This is a positive sign as it shows a change in sentiment from selling on rallies to buying on dips.

If buyers propel the price above the resistance line of the channel, it will suggest a potential change in trend. The HNT/USDT pair could then rally to $16.50 and later to the pattern target of $18.50.

This positive view could invalidate in the short term if the price turns down and plummets below the 20-day EMA. That could open the doors for a possible drop to the support line of the triangle. 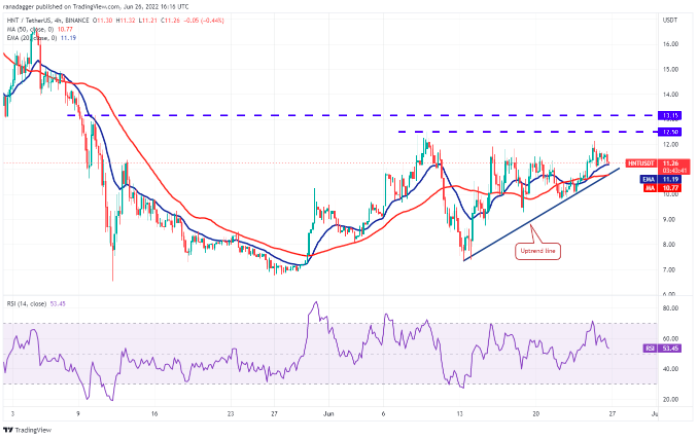 The bulls are struggling to sustain the price above $12, which suggests that bears are defending the overhead zone between $12.50 and $13.50 with vigor. If the price slips below the uptrend line, it could tilt the short-term advantage in favor of sellers.

Alternatively, if the price rebounds off the 20-EMA, it will suggest that bulls are buying on dips. The bulls will then make one more attempt to clear the overhead zone. If they succeed, it will suggest the start of a new up-move.