Sideways action has little time left to run, metrics suggest, as shorters increase bets on a dip below $20,000.

Bitcoin (BTC) said “no” to volatility for a third day on July 7 as Wall Street trading began with little change in mood. 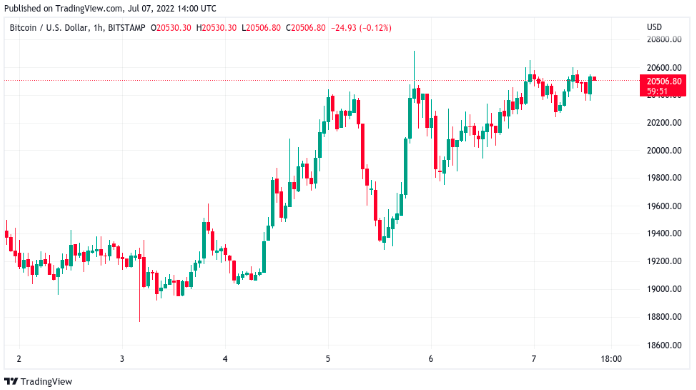 Data from TradingView followed BTC/USD as it fluctuated just north of $20,000, retaining a pattern characteristic of the week so far.

The pair stayed well within a defined range overnight, leading analysts to assume that a break up or down was next as a short-term prospect.

“Bitcoin strong consolidation at $20k, this can’t go on forever, triangle primed to break to upside or downside. But RSI bullish divergence tho,” Venturefounder, a contributor to on-chain analytics platform CryptoQuant, told Twitter followers on July 6.

Confirming the likelihood for volatility to return, meanwhile, Bollinger Bands on the daily chart stayed narrow — a classic prelude to a trend taking shape. 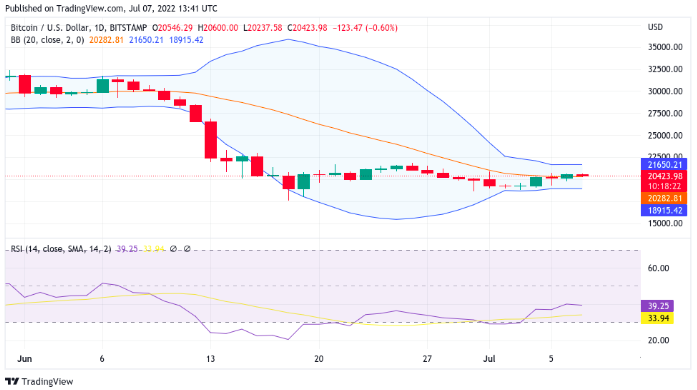 Regarding what direction that trend could take, all bets remained off on the day as caution summarized sentiment.

“Still not convinced with this type of price action,” crypto trader Ninja commented.

“below $20.6k is distribution imo, and any pumps shall be faded… the nuke is not over.”

Ninja additionally noted that short interest was building on exchange platform Bybit on the day, advising a hands-off approach until those positions unwound.

Calm before the CPI storm

On macro markets, the U.S. opened to modest gains, with the S&P 500 and Nasdaq Composite Index up 1% and 1.3%, respectively, within the first 30 minutes.

With opinions still mixed over how U.S. economic policy will change through 2023, trader Crypto Tony acknowledged that a true return to form for Bitcoin and altcoins may take longer than many realize.

“Personally on my worst-case scenario update i do not think we see the start of the next impulse until later next year and a new bull run peak until 2024 – 2025,” he tweeted on the day.