Bitcoin price surges to $21.8K, but analysts warn that the move could be a fakeout

Traders rejoice after BTC price spikes 7% to $21,800, but analysts say the macro downtrend is likely to prevail for the foreseeable future.

Hope springs eternal for many crypto investors after the market saw positive price movement on July 7, alongside gains in the traditional market.

The green day in the markets comes amid a backdrop of increasing jobless claims in the U.S., which is a possible signal that “the pressure on wages may have now peaked” according to Harris Financial Group Managing Partner Jamie Cox. According to Cox, a continuation of this trend could result in financial conditions that are “tight enough to allow the Fed to throttle back on the scale of rate increases.”

Data from TradingView shows that after trading near $20,400 for a majority of the day on July 7, the price of Bitcoin (BTC) spiked nearly 7% in the afternoon hours to hit a daily high of $21,860.

As the crypto faithful attempt to navigate the choppy waters of the crypto winter in search of a market bottom, here’s what several analysts are predicting could be next for Bitcoin.

Twitter user “Roman” posted the following chart noting that “Many are becoming euphoric and bullish as we have repeated similar candle patterns for the last 8 months.”

In Roman’s view, this is just the latest in a series of fakeouts that will trick a lot of traders into believing the bottom is in while in reality, the trend remains negative.

“Volume decreasing in a range is consolidation for continuation of trend. Not to mention thousands of inflows to exchanges before each top.”

Another trader who holds the view that the trend remains decidedly negative is pseudonymous Twitter user Gilberto, who provided the following chart noting that Bitcoin’s price recently broke out of a pennant formation.

“Bullish above $23K, for now daily trend is still downwards.”

As for what the potential price path for Bitcoin could look like if it continues along the downward trend, market analyst Crypto Tony posted the following chart which outlines a “worst-case scenario” that could see BTC bottom near $12,000.

When it comes to metrics that have been reliably used to help determine market bottoms, the 200-week moving average (MA) is one of the most popular and widely cited indicators that traders use to identify good buying opportunities. 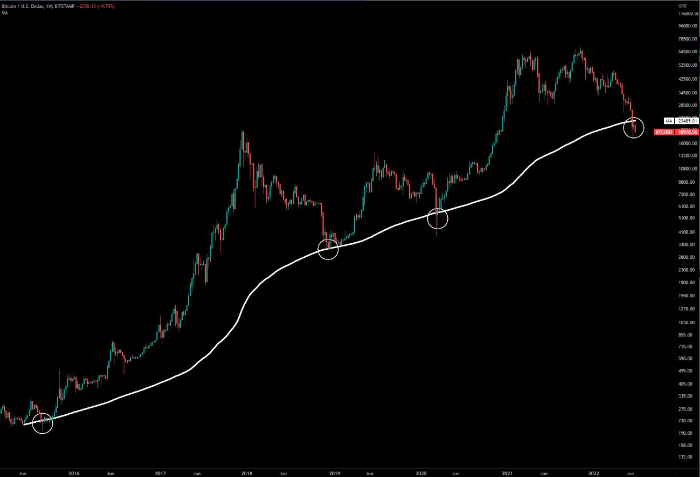 With Bitcoin now back below its 200-week MA for only the fourth time in its history, speculation has begun to mount about how long it will take to recover back above this line and what the appetite for trading will be like once it reaches there.

In response to this possible scenario, independent market analyst Michaël van de Poppe posted the following tweet outlining what he thinks might occur once the 200-week MA is recovered.

There’s probably an insane amount of liquidity above the 200-Week MA.

And then the sentiment will flip too.