While a classic technical indicator could be hinting at BTC price falling below $13,000 as well.

Bitcoin (BTC) investors in China plan to buy the dip despite an ongoing market correction and a nationwide crypto ban, a new survey shows.

A survey of 2,200 people conducted on China-based social media platform Weibo found that 8% of would buy Bitcoin when its price hits $18,000, according to Wu Blockchain. While 26% of the respondents prefer to wait until BTC reaches $15,000.

But a majority anticipated the price to fall even further with 40% saying they would buy BTC at $10,000.

Interestingly, another survey conducted by Bloomberg MLIV Pulse earlier in July yielded a similar outcome: 60% of the net 950 respondents on Wall Street calling for a $10,000 Bitcoin price.

The two polls show a striking similarity in bearish sentiments of crypto speculators in the U.S. and China. Nonetheless, on-chain activity shows that investors in the U.S. have been more bullish on Bitcoin versus their Asian counterparts since June 2022.

In particula, Bitcoin’s month-to-month price change, which tracks the 30-day change in the regional BTC price, has been positive only during U.S. sessions. Conversely, the metric has only been negative during Asian trading hours, data from Glassnode shows. 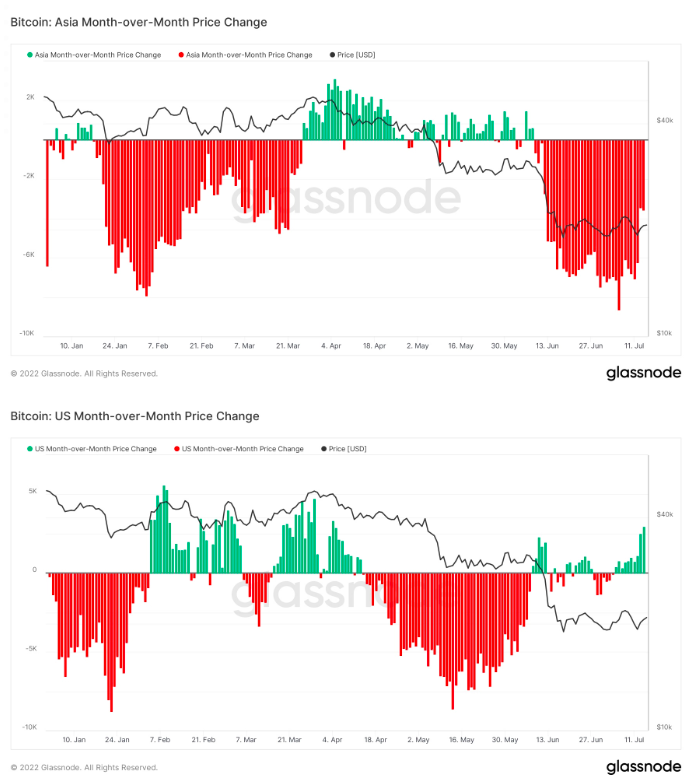 Bitcoin has been forming a potential “bear flag“ pattern that could result in a drop below $13,000 by September, as illustrated above.