2018 Ethereum price fractal suggests a $400 bottom, but analysts say the merge is a ‘wildcard’

A key ETH price indicator suggests the altcoin’s downtrend could extend to $400, but analysts are unsure whether the upcoming Ethereum Merge will be a bullish or bearish event.

There’s no rest for the weary during a bear market, and the Crypto Fear and Greed index shows that investor sentiment has been stuck in a state of “extreme fear” for a record 70 consecutive days.

As the market looks for a catalyst to reverse the trend, there is little on the horizon besides the Ethereum (ETH) Merge that seems capable of sparking a rally. If that is indeed the case, the market could continue to trend down or sideways until the tentative Merge date of September 19.

Data from TradingView shows that Ether price remains sandwiched in the trading zone it has been trading in since June 13 and it is currently running into the upper resistance near $1,240.

With the Merge still a couple of months away and little else on the roadmap for Ethereum in the near term, here’s what analysts are saying to watch out for.

A short message of hope at this significant level of resistance was provided by futures trader Peter Brandt, who posted the following chart and simply stated “Maybe baby $ETH.” 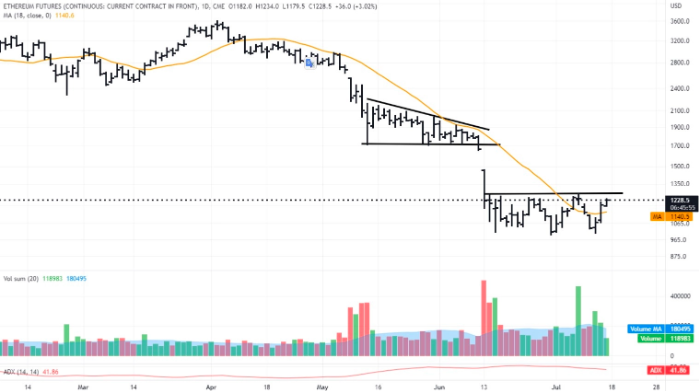 Additional context to go along with Brandt’s observation was provided by crypto trader Albert III, who posted the following chart highlighting the fact that Ether is now trading above several key moving averages.

“We got a bullish cross between 200 & 50 moving averages on 4h. Looking for more upside locally.”

Ethereum’s Merge is the “wildcard”

A more in-depth perspective for Ether moving forward was offered in the recent “ETH 30d returns outlook” report released by cryptocurrency research firm Jarvis Labs, which used the 30-day returns metric to “measure the short-term profit and loss of the aggregated market at a given time.”

As shown on the chart above, the 30-day returns for Ether are now “moving towards 0% after being deeply negative since April,” which suggests that the market is getting more bullish as the Merge approaches.

According to Jarvis Labs, instances when the 30-da returns dip below 0% during bull markets, indicate “prime buying opportunities,” while “flips above 0% are ideal selling opportunities” during bear markets.

When compared to the Ether price action during Q4 of 2018 where it consolidated in the low $200 range before dipping to $82 in December, “a repeat of this fractal now would bring Ether to the $400 range by December 2022.”

According to Jarvis Labs, if this fractal does indeed replay itself, “all pumps up to the $1,700 level will trigger sell-offs for the next 1 year.”

As a final word of caution, Jarvis Labs warned that while “short-term rallies to the $1,400–$1,700 range are possible,” traders should be careful as “they’re likely to be met by strong selling.”

The outlook for Ether in the near term was covered by analyst and pseudonymous Twitter user Crypto Tony, who referenced the following chart, outlining the next level of resistance to keep an eye on.