BTC’s market cap is way smaller than gold’s, but the percentage of Bitcoin held by institutional investors suggests that the current pricing reflects an excellent discount.

Bitcoin’s (BTC) price is down 56% year-to-date, but the correction was not strong enough to remove the digital asset from the list of top-20 global tradable assets. Bitcoin’s current $400 billion market capitalization stands higher than traditional companies like Exxon Mobil, Walmart and Procter & Gamble, but there’s always the question of whether a direct comparison between a commodity like Bitcoin and equities is valid.

Analysts and investors favoring stocks constantly remind crypto advocates that Exxon Mobil posted $25.79 billion in earnings over the past 12 months, as a justifying example of its valuation. But on the flip side, earnings don’t necessarily explain how Boeing booked $16.1 billion losses in two years, even as it holds an $87.1 billion market capitalization.

Measuring a commodity market value can be tricky. For example, in the case of silver, only 50% of precious metal is used in industrial applications. There are individuals and companies holding the asset for investment in the form of bars, coins, or jewelry and these are not “productive” revenue-generating assets.

Bitcoin’s value is vastly inferior to gold’s $11.2 trillion market capitalization, but what does “$400 billion” even mean, and how does it compare to broader asset classes such as global equities, real estate and debt markets?

The first question one should ask is: Has gold been a good store of value over the past five years? To find answers, traders have to compare its price against other trillion-dollar asset classes like global equities, oil and real estate. The overall goal for any store of value is to maintain the purchasing power, regardless of price fluctuations during the period.

From July 2017 until July 2022, gold has underperformed the remaining asset classes by 18% or higher. The precious metal broke above $2,000 in August 2020, but it could not keep up with the ever-growing prices of stocks, housing and energy. In comparison, the United States monetary base, bank deposits and cash, expanded by 48.5% in the same period.

One could argue that gold has failed to sustain its purchasing power over time, but it’s likely that more time is needed to evaluate how the precious metal will behave if the current global crisis accelerates or extends longer than expected. Meanwhile, in this same time period, Bitcoin presented 840% gains from July 2017 to July 2022.

There’s a valid question about Bitcoin’s volatility and rightfully so given the fact that the asset regularly faces 20% or higher weekly price moves. But there’s a simple and quick solution to alleviate this oscillation, or at least reduce the impact on a longer time frame. The dollar cost average (DCA) strategy consists of regularly buying pre-set amounts of an asset on a daily, weekly or monthly basis. 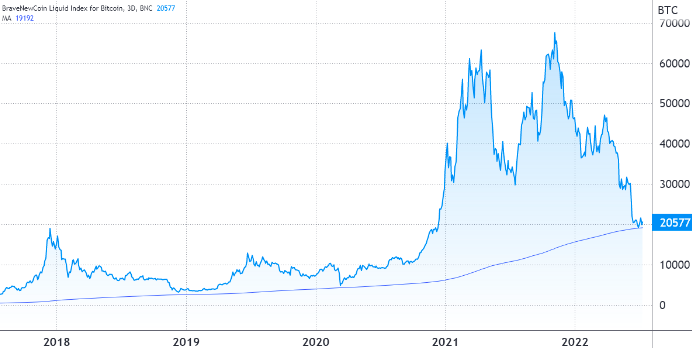 For instance, following this strategy for the past five years would have resulted in a $19,192 average entry cost. So even if the 8.3% gain to the current $20,800 price might not be enough to compete with gold, it certainly shows a more predictable form in which to use Bitcoin as a long-term store of value.

According to CryptoCompare, the Bitcoin investment vehicles under management (AUM) totaled $15.9 billion in June. This metric includes exchange-traded products such as Grayscale GBTC and exchange-traded notes from multiple providers. This ratio is equivalent to 4% of Bitcoin’s current $400 million market capitalization. 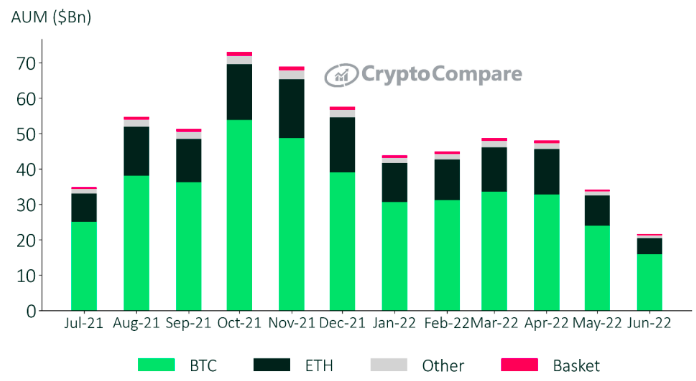 In comparison, the gold-backed ETF products stood at $221.7 billion in June, according to data from GoldHub. If one excludes the 50% “non-financial-related use of gold” like jewelry and industry, the remaining market capitalization stands at $5.6 trillion. Therefore, the fund‘s exchange-traded investment vehicles correspond to 4% of the adjusted gold‘s market value.

At $20,800, Bitcoin‘s investment vehicle holdings ratio matches the gold markets. While the $400 million market cap level might concern some investors, the asset’s adoption is minimal compared to the adoption of gold, a precious metal with a 7,000-year history as an investment vehicle.

Considering the fiv-year period that was analyzed and using a simple DCA strategy to rule out sharp price oscillations, gold is currently a better store of value, but that does not invalidate Bitcoin’s 8.3% gain in the period. In short, both assets have yet to prove themselves.