Bitcoin heads into FOMC day on 24-hour highs amid concern over $24.3K top

The Fed keeps markets on their toes while Bitcoin price action manages to inch higher prior to the Wall Street open.

Bitcoin (BTC) attempted to claw back losses on July 27 as a macro day of reckoning arrived for risk assets. 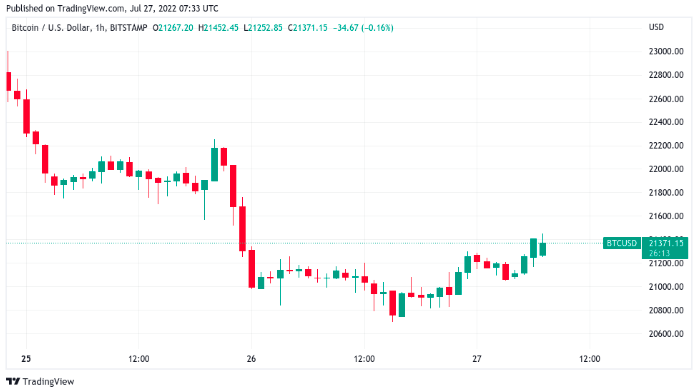 Data from TradingView confirmed a 24-hour high for BTC/USD prior to the Wall Street open on July 27.

The pair had sunk below $21,000 in the first portion of the week, heightening nervousness among traders already wary of potential headwinds from the United States Federal Reserve.

July 27 is set to reveal the Federal Open Markets Committee‘s (FOMC) next base rate hike, expectations flitting between 75 and 100 basis points in size but favoring the former. Both, however, are likely unfavorable for cryptocurrencies, as they reflect worries over both inflation and a willingness to bring the economy closer to recession to tame it.

“I will remain in my short while we are below the range high at $22,200,” popular analyst Crypto Tony summarized in part of his latest Twitter post on the day:

“Reclaiming the range high would result in a long position being opened as long as we remain above.”

Others looked beyond the Fed event to warn that even Bitcoin’s recent trip to multi-week highs was not enough to change its overall bearish trend.

“Rejection for Bitcoin despite the absence of supply at $24k is not a good sign,” on-chain monitoring resource Whalemap concluded:

“Neither TA nor on-chain volume profile saw this level as resistance with realised price bands being the only one hinting on a possible rejection.”

An accompanying chart of realized price by address — a breakdown of at what price different groups of BTC last moved — showed the relative absence of resistance at Bitcoin’s $24,280 local top. 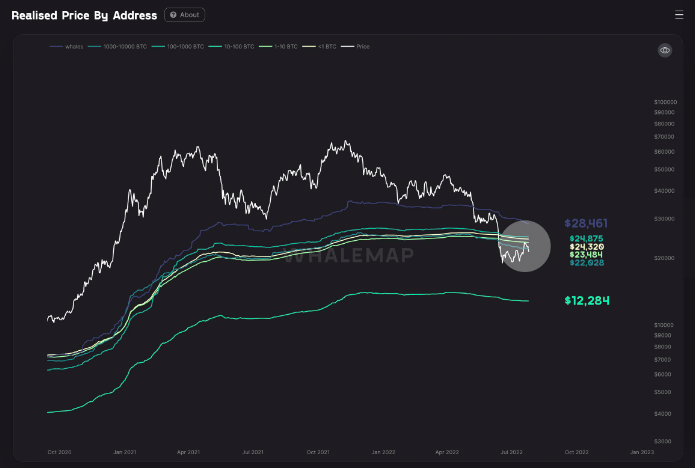 Discussing the potential impact of the Fed further, meanwhile, trading firm QCP Capital said that historical precedent was in fact on the side of hodlers.

Fed Chair Jerome Powell, staff predicted, would aim to reassure markets that future rate hikes would not be as drastic as this on

“Every FOMC meeting this year has seen a positive immediate market reaction to the rate decision. We expect the same for this one,” they wrote in their latest market update released to Telegram channel subscribers:

“Additionally, there is a good chance that Powell will indicate that this 75 bps hike is a one-off and that the Fed will be reverting to 50 bps on account of slowing growth and inflation easing up (with commodity prices falling across the board). Markets will react positively to this.”

That does not mean, however, that the rate announcement would be without its market jitters.

“From a volatility perspective, every FOMC this year has been a disappointment with front-end implied [volatility] dropping hard right after,” QCP added:

“Markets have been much more sensitive to data releases than FOMC. Realized volatility has been consistently higher post-CPI than post-FOMC.”

QCP was referring to recent U.S. inflation data releases in the form of the Consumer Price Index (CPI) monthly prints.