Planet of the Bored Apes: BAYC’s success morphs into ecosystem

The success of the “Bored Ape Yacht Club” NFT collection sparked the creation of an NFT universe powered by its proprietary ApeCoin token.

Nonfungible tokens (NFT) continue to make waves in mainstream media, with projects such as “Bored Ape Yacht Club” no more pertinent an example of the potential of the space. Some of the biggest names in Hollywood are proud owners of Bored Ape NFT avatars, which has no doubt driven interest and prices for Bored Ape NFTs.

The success of the “Bored Ape Yacht Club” (BAYC) NFT collection sparked the creation of an NFT ecosystem powered by its proprietary ApeCoin token, which has seen significant gains in recent weeks.

Before we delve into the ApeCoin-powered universe that is coming to fruition, it’s worth revisiting what “Bored Ape Yacht Club” is and how the Ethereum-based NFT collection exploded in popularity.

Dawn of the Apes

BAYC is the brainchild of Yuga Labs, a Web3 marketing firm that dreamed up an exclusive NFT collection made up of 10,000 programmatically generated Bored Ape digital collectibles.

The results were pretty incredible, with so many different combinations made from the 170 traits that could be thrown into the mix leading to a wide variety of Bored Ape avatars.

“Bored Ape Yacht Club” went live to the public in April 2021, with a pre-sale of 10,000 digitally verifiable Bored Ape NFT avatars selling for 0.08 Ether (ETH) each, worth around $190 at the time. All 10,000 NFTs were sold over the space of a week, leaving newcomers to have to purchase Bored Apes off NFT platforms like OpenSea.

The NFTs also serve as a membership card to the BAYC ecosystem as well as giving access to membership-only benefits, which we’ll delve into below. Needless to say, it’s been a hit, with Hollywood A-listers to the NBA’s best forking out large sums to own a BAYC NFT.

As big-name celebrities such as Justin Bieber, Eminem, Paris Hilton, Snoop Dogg and Post Malone acquired their own Bored Ape avatars, prices of the NFTs soared. The cheapest Bored Ape currently listed on OpenSea costs around 85 Wrapped Ether (wETH), or $250,000. The success of BAYC spilled over to conventional markets — with renowned auctioneers Sotheby’s selling a collection of BAYC NFTs for $24.39 million in September last year.

BAYC NFT owners were airdropped “Mutant Serums,” which allowed them to mutate their Bored Apes into Mutant Apes NFTs, which essentially allowed for 20,000 Mutant Apes to be minted in the process. BAYC owners could also sell their serums on the Bored Ape Chemistry Club — the official marketplace for the mutation-inducing NFT serums.

Yuga Labs also gave BAYC and MAYC owners a week to claim a unique Shiba Inu-inspired dog NFT in June 2021 with the launch of the Kennel Club. Each Kennel Club NFT was randomly generated from 170 different characteristics. Owners were able to sell their Kennel Club NFTs, with 2.5% of each sale on OpenSea donated to real-world animal shelters.

As the BAYC quickly gained traction and morphed into the exclusive membership ecosystem it is today, Yuga Labs turned its attention to creating a decentralized autonomous organization (DAO) that would serve as the backbone for the burgeoning community.

The Ape Foundation acts as the base layer for the ApeCoin DAO, responsible for everyday administration and project management within the ecosystem. An ecosystem fund pays Ape Foundation expenses as per directions from the DAO and acts as the infrastructure through which ApeCoin holders can participate in governance processes.

ApeCoin (APE) is the ERC-20 token used for governance and transactions within the Ape ecosystem. Holders can participate in the ApeCoin DAO, transact with other participants and gain access to exclusive ecosystem services, games events and items.

Yuga Labs has capped the supply of ApeCoin at 1 billion tokens, minted all at once, which are following a roadmap of gradual unlocks over a 48-month window. 150 million tokens were airdropped to BAYC and MAYC holders at launch, while a total of 470 million will be allocated to the DAO’s treasury and general resources for the ecosystem. 117.5 million was unlocked initially, while 7,343,750 APE will be unlocked every month over four years.

Yuga Labs received 150 million tokens, which have a 12-month lock-up before 4.1 million tokens are unlocked every month for three years. Of their total holdings, 6% will also be donated to the Jane Goodall Legacy Foundation, established by revered primatologist and conservationist Jane Goodall.

A further 140 million tokens were allocated to launch contributors with varying token minting schedules, while the four Yuga Labs and BAYC founders will share 80 million tokens. These have a 12-month lock-up, thereafter 2.2 million ApeCoin will be unlocked per month for 36 months.

The ApeCoin token airdrop took place on April 17, with different amounts allocated to BAYC and MAYC holders with a bonus amount for Kennel Club members as well. 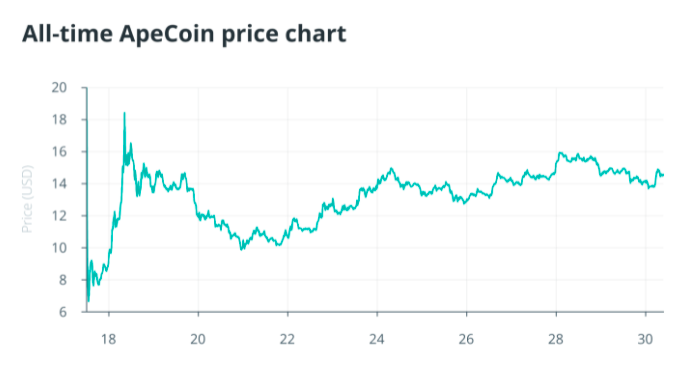 While it’s still the early days for ApeCoin, the undeniable triumph of BAYC and the wider ecosystem has seen interest in APE tokens surge after launch. Five days after the APE release, Yuga Labs announced that it had completed a $450-million fundraising round, which valued the company at $4 billion.

The investment is one of the largest ever made into an NFT-focused firm and suggests that the likes of venture capital firm Andreessen Horowitz, which led the fundraising round, have recognized the success and potential for further growth.

Yuga Labs also acquired the intellectual property rights to the highly successful “CryptoPunks” and “Meebits” NFT collections from Larva Labs in March as the company looks to expand its ecosystem and integrate interoperability between different projects.

With all these factors playing a role in the spotlight on the Bored Ape ecosystem, interest in ApeCoin and the various NFT projects under the Yuga Labs umbrella is likely to continue through 2022.