SOL price is 87% down from its all-time high, but do improving fundamentals strengthen its investment thesis?

The crypto sector is caught in a deep correction and recent reporting shows that a majority of altcoins are more than 70% down from their 2021 highs. Solana is on that list and investors are on the fence about whether the token has strong enough fundamentals to warrant buying Solana (SOL) at its current value.

Data from TradingView shows SOL is down 87.5% from its all-time high and given the current state of the market, most price breakouts fail to notch a daily higher high.

Despite, the dismal outlook, there are a few potential positives that could make Solana a project to watch once the wider market enters a consolidation phase.

SOL price received a quick boost late last week after a June 23 announcement that the project would release a Solana mobile stack, which enables native Android Web3 apps on Solana. 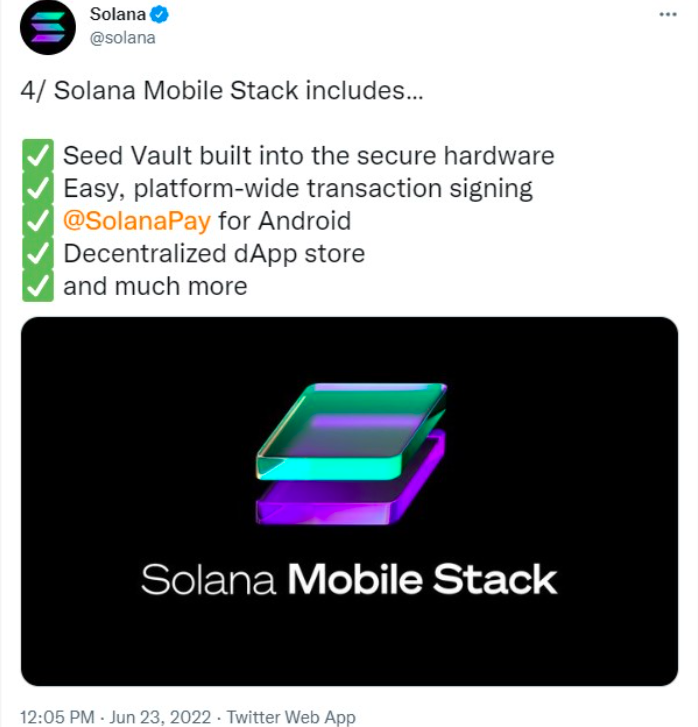 To go along with the new operating interface for smartphones, Solana also revealed that it will be releasing its own “Saga” Android phone through Solana Mobile in an effort to lead the way on Web3-enabled devices.

Web3 and the Metaverse are two of the topics that arose out of the 2021 bull market and point to the future of where blockchain technology is headed. This move by Solana shows that despite the short-term struggles, it continues to develop for the future and looks to play a part in the wider adoption of blockchain and cryptocurrency.

The low fee nature of the Solana blockchain makes it an ideal candidate for nonfungible token (NFT) projects and gaming DApps, and the release of a tech stack for mobile phones is the next step in creating wider access to these technologies.

If the developers can manage to solve the issues that continue to cause Solana network outages, the token has a chance of being a top contender once the wider market turns bullish again.

It feels to me like $SOL is going thru a similar trough of disillusionment as $ETH did back in 2018. In bear markets prices aren’t just reflexive—sentiment is too. @solana has a vibrant developer ecosystem and its downtime issues are solvable. This will be obvious in retrospect.

While it’s nice to look ahead at what the distant future may hold, the reality is that the short-term outlook for Solana and the wider crypto ecosystem is rather unappealing.

Insight into the lower price points to keep an eye on was offered by crypto trader and pseudonymous Twitter user Crypto Tony, who posted the following chart warning traders to not fall for the first retest of a major support level.

“First demand zone tested hence this reaction, but you really want to call a bottom already after the first test…”

Based on the chart provided, the notable lower levels of support for Solana are located at $13.50 and $3.50.

Market analyst and pseudonymous Twitter user Crypto Patel also predicts further downside in the near term for SOL due to a strong amount of resistance found at the 200-day exponential moving average (EMA).

Is SOL in the early stages of a recovery?

A more optimistic outlook for Solana was offered by pseudonymous Twitter user Trader McGavin, who posted the following chart highlighting the important levels of resistance at $60, $74 and $95.

“Double bottomed after breaking down from the wedge and rebounding higher. One of the first to bounce off the bottom and may be headed to $48.”

The importance of maintaining the current price levels was also touched on by crypto trader and pseudonymous Twitter user Altcoin Sherpa, who posted the following chart noting the bullish signal provided by the medium-term EMAs.

“$SOL: Still a do or die area in low time frames; this is the first time we’ve seen some of the medium EMAs flip bullish since March. Longing mid $30s is my current plan as a scalp since I missed the short higher.”