Bitcoin’s upside prospects are supported by at least three on-chain and technical metrics.

Bitcoin (BTC) could be in the process of bottoming after gaining 25%, based on several market signals.

The recovery seems modest, however, and carries bearish continuation risks due to prevailing macroeconomic headwinds (rate hike, inflation, etc.) and the collapse of many high-profile crypto firms such as Three Arrows Capital, Terra and others.

But some widely-tracked indicators paint a different scenario, suggesting that Bitcoin’s downside prospects from current price levels are minimal.

Notably, BTC’s weekly RSI became “oversold” after dropping below 30 in the week of June 13. That is the first time the RSI has slipped into the oversold region since December 2018. Interestingly, Bitcoin had ended its bear market rally in the same month and rallied over 340% in the next six months to $14,000.

In another instance, Bitcoin’s weekly RSI dropped toward 30 (if not below) in the week beginning March 9. That also coincided with BTC’s price bottoming below $4,000 and thereafter rallying to $69,000 by November 2021, as shown below.

Bitcoin price has rebounded similarly since June 18, opening the door to potentially repeat its history of parabolic rallies after an “oversold” RSI signal.

Another sign of a potential Bitcoin macro bottom comes from its net unrealized profit and loss (NUPL) indicator.

On July 21, Bitcoin NUPL climbed above zero when the price wobbled around $22,000. Historically, such a flip has followed up with major BTC price rallies. The chart below illustrates the same. 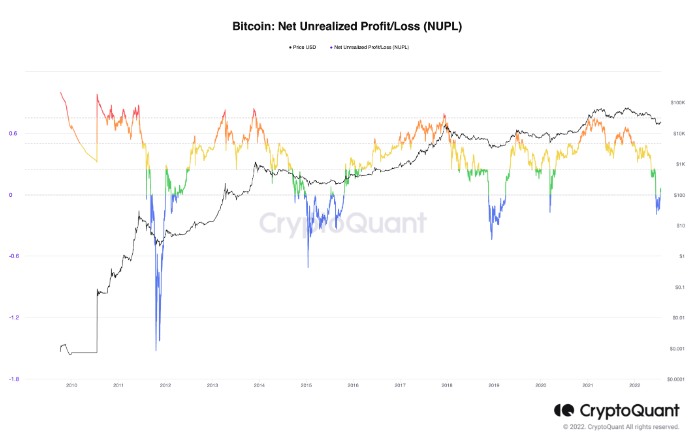 The third sign of Bitcoin forming a macro bottom comes from another on-chain indicator called the Puell Multiple. 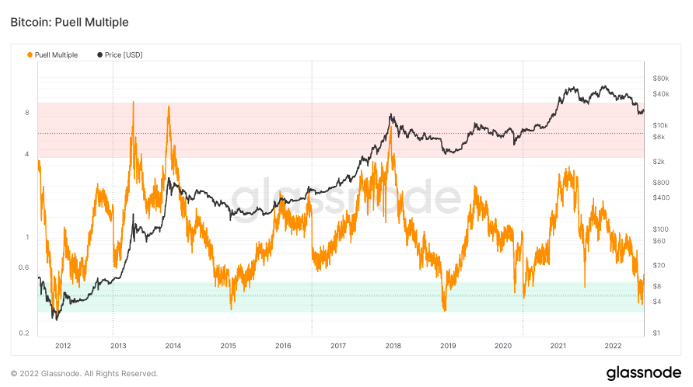 A strong Puell Multiple reading shows that mining profitability is high compared to the yearly average, suggesting miners would liquidate their Bitcoin treasury to maximize revenue. As a result, a higher Puell Multiple is known for coinciding with macro tops.

Conversely, a lower Puell Multiple reading means the miners’ current profitability is below the yearly average.

Thus, rigs with break-even or below-zero revenue from mining Bitcoin will risk shutting down, giving up market share to more competitive miners. The ousting of weaker miners from the Bitcoin network has historically reduced selling pressure.

Interestingly, the Puelle Multiple reading as of July 25 is in the green box and similar to levels observed during the March 2020 crash, 2018 and 2015 price bottoms.