Analysts say Bitcoin has ‘already capitulated,’ target $41.3K as the most hold level

On-chain data suggests that the market has “already capitulated” and traders identify a bullish technical analysis pattern with a breakout target near the $41,300 level.

Traders’ struggle to build sustainable bullish momentum persisted across the cryptocurrency market on April 20 after prices slid lower during the afternoon trading session and ApeCoin (APE) appaers to be one of the few tokens that is defying the current market-wide downturn.

Data from TradingView shows that an early morning attempt by Bitcoin (BTC) bulls to breakout above $42,000 was soundly rejected by bears, resulting in a pullback to a daily low of $40,825 before the price was bid back above $41,000.

Here’s a look at what several market analysts are saying about the weakness in Bitcoin and what levels traders are looking at as a good spot for opening new positions.

According to on-chain data firm Whalemap, there is a significant amount of volume near the $40,000 price level. 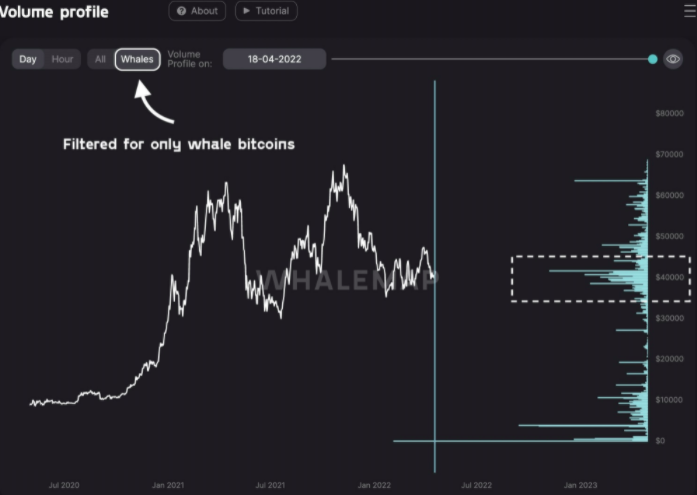 “A largely significant portion of whale holdings reside between $38,000 and $42,000 right now. Vital area for Bitcoin. Above it – bullish. Below it – bearish.”

Analysts say most of the market has already capitulated

Similar to the observation made by Whalemap, Glassnode analysts noted that “a large amount of coin supply has been re-accumulated between $38,000 and $45,000, which is the primary price range of the current market consolidation.”

When the data is broken down between long term holders (LTH) and short term holders (STH), which is determined by a holding threshold of 155 days, only a few of the STHs who bought between $50,000 and $60,000 are still holding, “suggesting most ‘top buyers’ have likely already capitulated.” 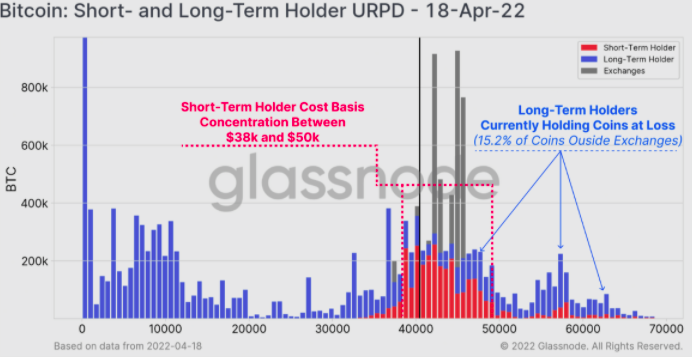 According to Glassnode, a large percentage of the current STH demand “is clustered between $38,000 and $50,000, affirming that investors continue to see value in this price range.”

The fact that 15.2% of the Bitcoin held by LTHs is currently at a loss suggests that a lot of LTHs “were caught off-side” by the most recent market correction according to Glassnode, a result that is typically seen “in late-stage bear markets, most of which preceded a final capitulation shake-out event.”

Glassnode hypothesized that some of the current weaknesses in the market could be due to the fear of further capitulation, which is prompting traders to wait on the sidelines until such an event occurs.

“However under the surface, it appears as though a huge swathe of the market has already capitulated, in a statistically significant manner, and a resilient inflow of demand between $35,000 to $42,000 range has quietly absorbed this sell-side in its entirety.” 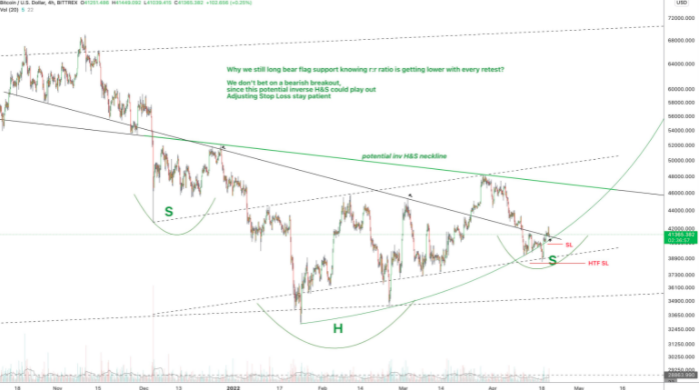 According to Abnessa, Bitcoin is currently “trying to reclaim this level after the failed support/resistance (S/R) flip.”

To establish the bullish case, Bitcoin needs to “successfully flip S/R of the current descending trendline” and “reclaim support up to the green neckline,” thus completing the inverse head and shoulders setup.

As for the bearish case, a failed retest of $41,300 would result in a “breakout below the bear-flag” and would “also mean S/R flip rising wedge resistance as support.” If this were to occur, Abnessa sees a “minimum dump target of $35,000.”