Since launching last month, the ProShares Short Bitcoin Strategy ETF (BITI) has eclipsed others in inflows.

Bitcoin (BTC) remains a popular institutional investment target in July, but the money is not betting on a bright future.

According to data from research firm Arcane Research published July 6, institutional flows focused on products offering exposure to shorting BTC in the first week of the month.

Shorting Bitcoin is the name of the game

Since launching in the United States in late June, the ProShares Short Bitcoin Strategy ETF (BITI), the first exchange-traded fund (ETF) to be “short” BTC, has proved a hit.

That trend has only accelerated in July, with short exposure jumping over 300% in days, data confirms.

“After becoming the second-largest bitcoin-related BTC ETF in the U.S. after only four days of trading, the net short exposure has grown further and increased by more than 300% last week.” 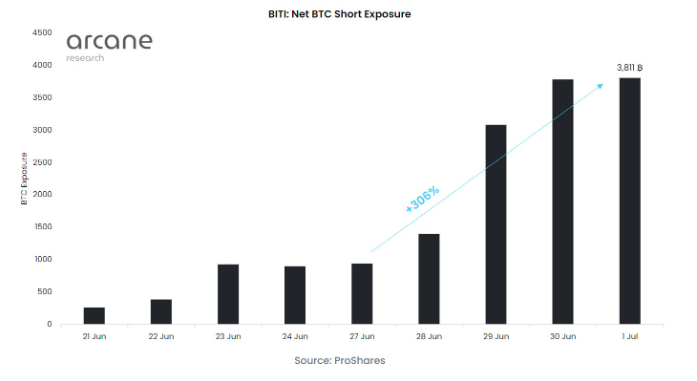 The timing for BITI in the U.S. is conspicuous in itself, coming as BTC/USD plumbed multi-year lows of $17,600.

Expectations among analysts remain skewed to the downside, and the BITI inflows appear to confirm that institutional sentiment is likewise.

While long BTC investments were just $20 million, CoinShares nonetheless highlighted persisting demand for such products despite shorts stealing the limelight.

“This highlights investors are adding to long positions at current prices, with the inflows into short-Bitcoin possibly due to first-time accessibility in the US rather than renewed negative sentiment,” it wrote.

Business (or lack of) as usual for GBTC

After U.S. regulators rejected Grayscale’s application to convert the Trust to a Bitcoin spot ETF, the firm began legal action, a sign of the frustration facing an industry dealing with both regulatory scrutiny and declining asset prices.

The so-called GBTC premium, the difference between Bitcoin spot price and shares of GBTC, has been negative for over a year, at several points becoming a more than 30% discount.