Players took offense to the suggestion that gamers may not yet fully understand the benefits of NFTs.

Nicolas Pouard, vice president at Ubisoft’s Strategic Innovations Lab, commented on the negative gamer feedback that Ubisoft received after introducing Quartz and Digits, in an interview with Finder.

“It’s a reaction we are accustomed to. I think it’s great because it shows how engaged our players are and how passionate they are about their hobby and gaming in general. And looking at that, I think it’s reassuring.”

In the interview, Pouard goes on to clarify that Quartz and Digits are a “matter of personal choice” for players who “at no point” will be forced to use them.

In Pouard’s explanation of Ubisoft’s motivations, however, some readers clung on to one phrase he said: “I think gamers don’t get what a digital secondary market can bring to them.” The idea that players may not “get it for now” was not taken very lightly by the Twittersphere.

Below are some reactions from gamers to a Tweet by Kotaku, the popular video game blog:

Some users were either simply “not interested” or believe that there is more gain for the company, itself, than for the gamers. 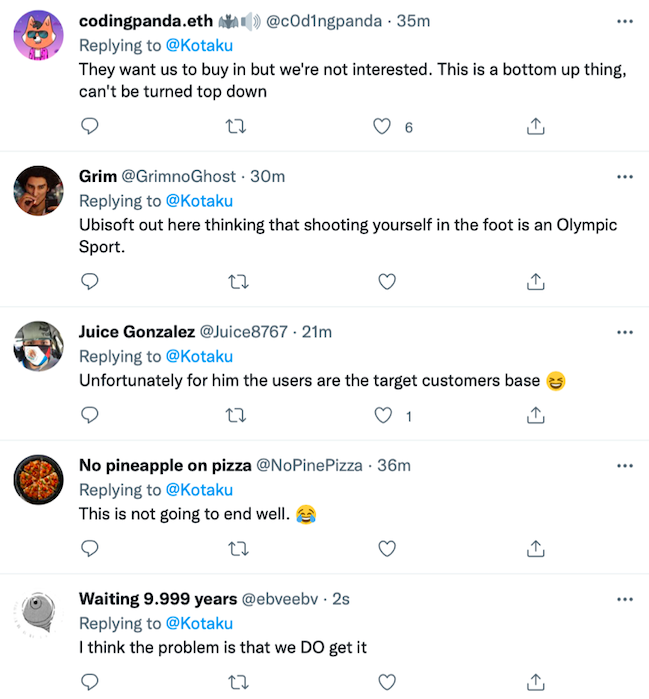 There is also sentiment around gamers having true ownership of not just a skin or a weapon, but of characters and storylines. If players can become active contributors to a gaming ecosystem, then could it be possible for them to have ownership over the games, themselves?

Ubisoft recently partnered with startup Aleph.im, which will provide a decentralized storage solution for Ubisoft Quartz. The gaming giant plans to continue integrating Digits into Quartz through 2022.