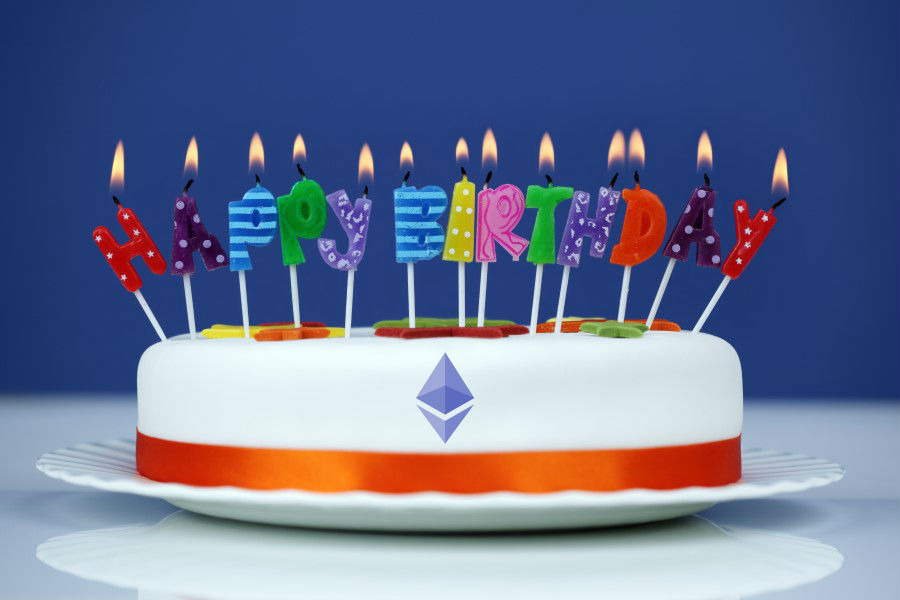 Nick Cowan, CEO of the Gibraltar Blockchain Exchange (GBX),  which aims to position itself as a world-leading institutional-grade token sale platform and digital asset exchange that is a subsidiary of the Gibraltar Stock Exchange, a European Union (EU) regulated stock exchange says:

“It is quite clear the positive impact Ethereum has had on the crypto space as a whole and I don’t believe we would have seen such a rapid development of the token-sale market without it. The diverse applications and use cases for Ethereum and its smart contracts have given us a rich and diverse mix of projects.

The Gibraltar Blockchain Exchange focused the initial development of our institutional-grade token sale platform, the GBX GRID, on ERC-20 tokens. This meteoric rise of tokens as a new route to financing for companies has changed the world and I think we’re still only at the beginning. There is still so much more to come.”

“‘Frontier’, the first Live release codename of the Ethereum project, generated the Genesis block exactly two years ago. Today we celebrate Ethereum’s anniversary as the adoption of this technology becomes more widespread, backed up with more than 250,000 developers and 1,800 registered DApps. Perhaps more importantly, 94 out of the top 100 blockchain projects have launched on top of the Ethereum network.

Ethereum has paved the way for many interesting projects like EOS, NEO, Cardano and Zilliqa, highlighting how indispensable this technology has become across a wide spectrum of industries. These projects raised significant funds during their respective ICOs, but have also thrived as a result of dedicated communities and teams of developers building the underlying infrastructure to enable the simple launch of applications.

The Ethereum blockchain is giving Orvium the platform to disrupt the $25 billion publishing industry, allowing researchers to have their publications reviewed in a more open, transparent, cost-effective and trusted way with the use of smart contracts. The continued pursuit of science through the empowerment of researchers will help deliver new levels of cross-sectoral innovation, improve our daily lives and weaken the influence of private interests, all for society’s benefit.”

“If Ethereum is a 3 year old iPhone, aeternity is a brand new android.”

“Ethereum has been wonderfully stable now for years and this is the greatest credit that can go to its authors, Vitalik Buterin, Gavin Wood and others. It’s this stability which makes it so hard for other smart contracting blockchain challengers, even those which promise some brilliant features, to take Ethereum on.

Not only does Ethereum have around 17,000 nodes running the network across six continents, its developer community is estimated to be one of the the largest in the world among blockchain projects, at approximately 250,000 members. In less than a year, Truffle, a development framework for Ethereum, has been downloaded more than half a million times. These are some unbeatable network effect numbers.

Saying this, there is definitely a long way to go for public blockchains, Ethereum included, in order to achieve mass adoption and handle billions of potential users. Famously just half year ago a single popular app, CryptoKitties, was able to clog the entire Ethereum network.

Fortunately, the Ethereum ecosystem is working hard to find potential solutions. No one knows how vital this achievement will be more than Vitalik himself who said at the start of the year that 2018 would be the moment for scalability and various solutions like Plasma, proof-of-stake, and privacy to be rolled-out.

As for Vitalik, he’s an amazing ambassador for the underlying socio-economic struggle of decentralization – to return control of technology to ordinary people. There are few others in this space who remain so focussed on those deeper political ends as he is.”

Gabriele Giancola, CEO and co-founder of qiibee, the Swiss loyalty token protocol helping brands around the world run their loyalty programs on the blockchain, says:

“Over the last three years, Ethereum has functioned as the platform which allows any service to be decentralized. Its open-sourced nature has signalled huge advancement for the future of the industry as it can update its protocol based on the most recent trends in the market, providing huge flexibility for all parties involved. Ethereum’s current success can be largely credited to early adopters on both the developer and user side, however mainstream adoption remains the overarching goal.

As Ethereum is constantly advancing the development of its protocol to remain at the forefront of the agenda, it makes it easier for us at qiibee to improve the efficiencies of our products and remain dedicated to our customers’ needs. Utilizing the Ethereum blockchain has enabled us to create a distributed ledger of all our loyalty data by increasing security and eliminating a single point of failure. I believe validating Ethereum’s future through proof-of-stake will ensure its immutability over the next three years and beyond.”

“Ethereum is an important step for crypto and over the last three years, we have witnessed first-hand the impact it has had on the blockchain and crypto space. The Enterprise Alliance has on-boarded some of the world’s biggest and most influential companies and it is thanks to this revolution that crypto is now being taken more seriously by corporations.

Smart contracts are already disrupting venture capital, and more money was raised through ICOs than through VCs in 2017. I believe smart contracts also have the potential to change the landscape of the video game industry.

This year, Ethereum will need to prove that it can scale and evolve to proof-of-stake. 2018 is also the year of competition for smart contract blockchains including the likes of EOS, Tezos, and Zilliqa. Our preference at Ultra is EOS because it is scalable, feeless, and has a layer of accounting. With this in mind, the future looks bright for Ethereum. The Casper and Sharding merger, in particular, is an exciting prospect and it will be interesting to see that unfold. This is only the start for Ethereum and I look forward to seeing what the next three years will bring!”

“The development of blockchain technology and Ethereum is a revolution, both in the technical sense and as a political and social catalyst. Now, the internet is transforming once again and an unprecedented global freedom has started to articulate its legs and arms. Well, for me, blockchain is those legs, and Ethereum the arms.

With a multitude of real-world use cases Ethereum is a powerful platform, which goes beyond monetary transactions and gives users anywhere the ability to execute actions after a previously coded contract has met certain rules. This provides security and speed on what are traditionally insecure and slow processes without an intermediary.

At its core, Ethereum is all about freedom and putting control back into the hands of the user. At Olyseum, we view Ethereum as an excellent resource to empower fairness and transparency on a collaborative social network that is focused on something powerful that needs rules, trust and collaboration in competition: sport.”